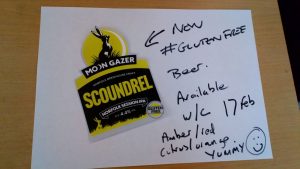 Ok, I fezz up, maybe the choice of the name Scoundrel might leave some people to think that this beer is a bit on the naughty side, but we rather hope you will think of it as a cheeky term of endearment.

The hare is indeed known in some parts as’ the Scoundrel’, but it is said with affection and refers to its devilish, cheeky nature.

And that’s the point – we like to think of people enjoying a cheeky pint of Scoundrel, our latest new brew, and our latest gluten free offering too. Cheeky; full of mischief and one people can’t help loving.

You will also look out for different notes in this beer as it is the first Moon Gazer session IPA brewed with lactose to offer a sweetness to balance the bitterness of the hops. OK, it’s nothing new but not something that has been a feature to date in our signature, crisp bitters and IPAs. In for a penny, in for a pound lets ring the changes with this Scoundrel.

For the inquisitive ones amongst you, lactose adds a sweetness to a beer as it is unfermentable by brewers’ yeast. It also adds a creaminess and fuller body to the finished beer.

As to the other characteristics of the beer – well we wanted to make this a special brew so have picked some classic and timeless ingredients when selecting our hops and malt.

Maris Otter malt forms the backbone of the barely base, but is blended with classic Heritage Chevalier malt which you keep telling us adds a depth of flavour and almost Digestive sweet biscuit note to our brews.  We too love the combo of malts so we are sticking with it!

Added to the classic base malts are some Crystal, Chocolate and Rye malts – oh and a sprinkling of Dextrin for mouthfeel. The resulting colour is an amber ale but with a distinctive red hue.

However, the American boys don’t get it all their own way as we have also introduced some European flavour from Bobek (think lime and floral) and an all time UK favourite of ours – Goldings which lends a honey and earthy touch.

Chuck em all in, boil em all up and hey presto – a cocktail of fruit flavours which will give you a tasty yet balanced beer.

As for the gluten free, well we add in the magic dust to drop out the gluten and send it off for testing, so that’s why you have to wait a wee while before we can release it to the pubs.

We hope that you look forward to welcoming our new brew and being a bit of a Scoundrel down the pub.

Oh, and yes it will be regular feature on our guest list from now on.