It’s all about the hops right? – Wrong! 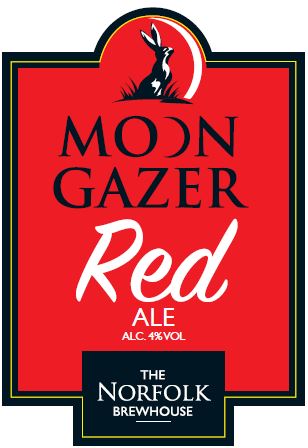 How our new Moon Gazer Red was born.

Although we’ve never done it ourselves at The Norfolk Brewhouse, I’m quite a big fan of breweries who do a year of hops. In simplistic terms they take a core beer and brew it each month with a different hop to change its characteristics and flavour.

After all beer flavour is all about the hops isn’t it? Well – no, it isn’t actually – and as part of the Maris Otter 50 celebrations last year it was great to see more and more people talking and writing about the importance of barley to beer quality and character.

So, with a twist on the year of hops we decided to keep the hop content largely the same and play around with the malt ingredients. So, using our ruby ale as a base we set about creating a beer which is more red in hue.

Obviously Maris Otter pale ale remained the base malt, but we included in the mix some Maris Otter Extra Pale – to add more lightness and a touch of sweetness. As for the colouring malts, yes we kept some Chocolate malt for some coffee character, but in lower quantities and upped the amount of Crystal 400, plus a touch of 240.

Admittedly, for balance, there was a subtle tweak to the late boil hops, but the key changes were in the malt.

The result is a beer which sits between our ruby and amber in both colour and flavour, but is clearly related to the other two. A robust bitter, but with fruity notes and a good malt complexity.

We hope you like it. It is heading out to pubs next week. If you do we hope to do malt twists on out other beers as specials too.