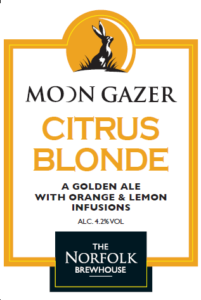 Well, the sun has been trying to keep shining – so, here at the brew house we figured that it’s time for a new golden brew for summer.

Last year – as you may remember – our St Clements Wheat beer went down really well, although lots of pubs also asked that if we were ever to do it again could we also consider doing it as clear golden ale not a wheat beer.
Well, call me a soft touch but I do like to do what the pubs want and so the challenge was set for Bruce to devise a zesty brew. The result is our new brew called Citrus Blonde.

Fresh oranges and lemons are called for and lots of them as we need plenty of zest to give it that lovely fresh taste.

So, what else makes this new beer special?

Well, we were looking for something light and golden to welcome in the summer – and also something which would be a noticeably different option from our growing range of staple golden beers.

The starting point, as you would imagine with a Moon Gazer ale is Norfolk Maris Otter, using the extra pale version to give it a light golden colour.

We’re keeping it simple with the malt, so just adding a bit of wheat and a sprinkling of crystal malt for a touch of flavour complexity and depth – but essentially a pure, lightly malted backbone. Its not to heavy on the malt either – as we will be brewing it to a 4.2% abv.

In medieval times Belgian beers would often use coriander, orange and bitter orange instead of hops.

Our Citrus Blonde recipe follows this tradition in using orange peel as well as lemon, in equal proportions to infuse the beer with a rich, fruity zesty finish. It does mean all hands to the pumps – or zesters – as over 120 fruits need to have their zest carefully taken off so as to get all of the fruit flavour but avoid the bitterness which you can get from the pith of the fruit.

We will be complementing the fruit with some hops – using the UK Admiral hop as the bittering hop is Admiral – which lends itself well as it is a hop with orange characteristics, but we also used the German hop Hallertau and the Czech hop Saaz to add a gentle Bohemian pilsneresque backbone to the aroma. Bruce will also no doubt sprinkle in some citrussy New Zealand hops as he simply can’t help himself!

So, lots of thought has gone in to crafting this beer, do look out for it and enjoy it and raise a glass to the arrival of summer.

Oh, and as for the St Clements wheat beer – it will be back at some point!