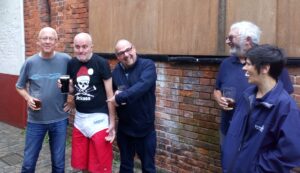 We were well chuffed this weekend when Gerry, a regular at The Kings Head Magdelen Street, in Norwich had his hair and beard for the first time in 20 months – all in the aid of local cancer charity It’s on The Ball.

Gerry took a vow not to have his hair cut until after the pandemic was over and that when he did it would be for the charity supported by his local pub The King’s Head, in Magdalen Street.

However, with the reality of the pandemic being here for a while Gerry decided the time was right to support the charity, as he explains:

“I wanted to do something to help the charity – as a pub the Kings Head always raises several hundreds of pounds for It’s on the Ball to support their efforts in raising awareness of testicular cancer.”

“With all the lockdowns charities such as them have really suffered since local activity from the pubs has been lost, not just financially but also in the awareness aspect. So, I decided the time was right and to be honest after 20 months I was beginning to feel like Robinson Crusoe!”

The event was supported by us at team Moon Gazer Ale and are of course very appreciative of the support form Gerry.

It was a great effort, and it just highlights the lengths people will go to just to do their bit. What you may not appreciate is that every time someone asked Gerry over the last 20 months why his hair was so long he was spreading the word for the charity.

The event which took place outside the award-winning Magdalen Street pub attracted a crowd of regulars who on the day chipped in to raise a total of £740, which made it all worthwhile for Gerry, especially as he was watched Vince and Anne Wolverson who help to run the charity, and commented:

“We are truly grateful to Gerry for his efforts – it’s been a really tough year trying to keep the message out there and saving young men’s lives – events like this show just how valuable pubs and their regulars are to charities like ours and to the communities.”

A big thanks also to a couple of regulars Ian and ‘Flo’ who also joined in the fun and had a trim themselves!  Also shout out to Peter for doing the trimming.

To find out more about the work of Its on The Ball and how you or your partner can avoid testicular cancer then check out their website: Itsontheball.