Lockdown loyalty – I’ll raise a glass to that 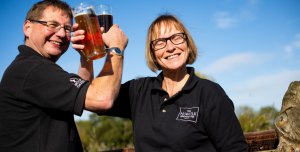 All of us will have vivid and lasting memories of when lockdown began.

It seems an age ago now, but I remember standing alone in a cold, silent brewery. A world away from the usual cacophony of chinking bottles, whirring pumps, clunking casks of beer and typically excruciatingly poor singing by Team Moon Gazer going about their daily duties.

For now, the brewhouse mad house was depressingly dormant; the staff furloughed, the future uncertain.

Ninety per cent of our business was supplying hundreds of pubs across Norfolk and Suffolk but sadly they too were facing an uncertain future and had fallen equally silent as last orders were called indefinitely.

There was soon a sound, but sadly only that of me tapping on my laptop – as plans A – Z were typed into financial spreadsheets. How and in what shape would Moon Gazer survive?

Knowing which scenario to focus on was hard – quite simply no one had the answers. For the first time in the brewery’s short history it was not in control of its future.

However, what was to transpire over the coming weeks and months not only assured me that the brewery did have a future but also reconnected me and reminded me of all that was important in what Moon Gazer does and represents. If you like, it reminded me of the ‘why?’ Rachel and myself started on the journey.

It started with the sound of the phone ringing – “Can we have some bottles delivered asap please?” The sound and the same plea for more beer was to be repeated and increase in frequency as the small local independent farm shops and delis which we supply were finding themselves the focus of fulfilling local shopping needs. Many were also reinventing their business from delis to delivery services – literally working round the clock to meet demand.

What we also saw was a loyalty to local – time after time customers who have become friends and part of our wider team would say how important it was to fulfil their increased demand with Norfolk produce. The clarion call was ‘we are in this together’.

The support and loyalty of these retailers will remain a constant source of inspiration and they forever have my gratitude.

Indeed, as I drove round the empty roads of Norfolk there was a small army of Norfolk’s artisan food producers all delivering their wares.

Soon, we would form into groups of informal alliances, helping each other by sharing deliveries or offering other support.

Loyalty was also shown in bucket loads by the public. The pubs may have been closed but Moon Gazer fans wanted their tipple of choice and while on line sales grew, so too did a steady stream of calls to the brewery for local delivery or collection.

Touching emails and conversations along the lines of ‘we just wanted to support you’ made me remember that we don’t just make beer – we connect with people. There is a community out there that are proud to consider themselves part of what we do – arguably the most important part – drinking the beer!

It was hard to keep up as the staff were still on furlough, but one by one we started rebuilding the team. With the pubs reopening more loyalty revealed itself as many of them also followed the mantra of the shops and delis before them of the importance of supporting Norfolk producers and for many that meant Moon Gazer.

The future for The Norfolk Brewhouse as with so many businesses remains uncertain – but the loyalty and friendship of customers of all types is something that will always stay with me.

Rachel and I raise a glass to you all.