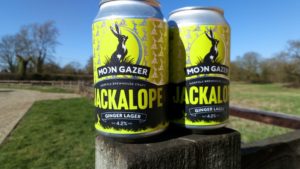 All good things come to those who wait.

Indeed, wait you have, as it has been 6 years since we last brewed our ginger lager – then called Ginger Kick. It’s hard to think that this lager first got the taste buds and tongues tingling way back in 2013.

Well, wait no more as on April 3 we relaunch ginger kick with a new look and a new name – but the same great recipe.

So, say hello to Jackalope – ginger lager in a can.

Using the best part of 30 kilos of fresh root ginger – painstakingly peeled and chopped by the very patient Cathy and Andrew – Jackalope has a light refreshing ginger aroma and taste.

The ginger doesn’t over power but it delivers a great flavour – so we think it will appeal to lovers of ginger but also those just wanting a bit of variety in their lager.

OK, we fully accept a bit of flack from those who think lager should follow the principles of German beer brewed according to the Reinheitsgebot – which permits only water, hops, and malt as ingredients – but to be honest were just trying out something different. Love it, or hate it, we think that it has its place.

So, why the long wait?  Quite simply it takes a long time to ferment and condition and for the flavours and balance of the beer to fully develop.

That time issue is tricky when you are a small brewer as tanks with beer in are tanks that you can’t brew in!

Thankfully we have recently increased the number of brewing tanks which we now have at Moon Gazer allowing us to be more experimental and plan in time-consuming brews, alongside our other core lagers of StubbleStag and DewHopper.

Why the name? Well as all Moon Gazer beers are now all named after a hare we thought that this beer, with its added twist of ginger, should be a hare with a twist.  Indeed, that is  what Jackalope is, a mythical beast which is part hare and part antelope – with the ‘Jack’ part of the name taken from the American name for a hare – Jack rabbit.

So, for all of you who have waited so a patiently the wait is nearly over – and for those of you who can’t remember the original we are sure that you will enjoy it.