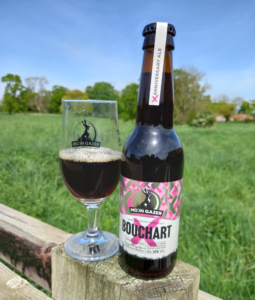 For those of you that know and enjoy Moon Gazer Ale you know we like to celebrate all that is Norfolk, and in particular Maris Otter barley.  You will also know that we love to follow a bit of tradition and pop a contemporary twist on it.

While many new wave brewers will have you believe they have invented new beer styles – and indeed some have – the reality is that there aint a whole lot that hasn’t been brewed over the last 2000 years and on so many occasions brewers’ latest concoctions owe their roots to centuries old brews!

So is the case when it came to celebrating our 10th anniversary by brewing Bouchart X – a mild at 10% abv.

Crikey came the cries; “milds aren’t that strong; they are cheap and weak dark ales” and apparently only enjoyed by folk who look and talk like Andy Capp.

How wrong can you be? Milds were originally a lot stronger, sometimes quite a lot – and the mild referred not to strength but to the low hopping rate and low bitterness and freshness, moving away from the practice of drinking aged beers.

Soon these, strong, fresh and yes even golden ‘milds’ were Britain’s favourite tipple.

Then along came World War I and the need to raise taxes – step in a Chancellor to tax the most popular beer. Brewers responded, reducing the amount of tax they paid by lowering the beer strength.  World War II the same thing happens and with each subsequent need to raise taxes – so, by the 70s mild had indeed become weaker and darker – designed as much by the tax man as the brewers!

That said it is a style that we love, a style where the malts shine through and complex flavours swirl around the tongue.

That’s why for our birthday brew we decided to super charge our dark mild Bouchart – and upscaling it from its 4.9% abv to a rather grandiose Bouchart X.  (X for 10% and 10th anniversary).

Essentially, we used the same ingredients – with a bit of tweaking to maintain the balance, we also wanted to add a bit more darkness – so we’ve introduced some Cara Special three, a dark German malt which adds colour without any associated bitterness.

As you would expect, the backbone of the malt comes from Norfolk Maris Otter – the star of so, so many Moon Gazer ales – with a rich complexity coming from the addition of chocolate malt, Crystal 240 and a touch of wheat. This gives Bouchart’s trademark liquorice, biscuit malt flavour, while the use of British hops Pilgrim and Goldings add a touch of blackcurrant, honey and spice notes.

A beer to be savoured – a simple, unfussy recipe but one which delivers on so many levels.

It’s an approach which suits us well and has stood us in good stead for a decade and hopefully will do so for many more to come.