Moon Gazer…the hare with many names

The next Full Moon – 21 March – will usher in new names and a new look for Moon Gazer.

There can be few animals which are as etched in history, mystery and folklore as the hare. This majestic creature is also the inspiration behind our Moon Gazer name.

For centuries ‘Old Long Lugs’ has delighted and inspired, and according to legend is a companion to ancient Gods, a guardian against evil, the bringer of luck and so much more besides. However, in our eyes it is simply a truly fabulous animal which is a delight to watch.

Such is the mystery behind the hare that way back in the 13th century a poem containing some 77 names attributed to it was used in a hunter’s ritual. On seeing the hare the hunter would recite the poem of 77 names – presumably as quickly as he could – and the hare would surrender to his power

Today, we will use the names for far more humane and enjoyable purposes – with the ritual of calling out the names over that bar resulting in the presentation of a glorious pint!

Whilst you will need to wait until the Full Moon for the complete picture lots of you have been asking about the new ‘characters’ behind our beers. So, allow us to introduce you to a few of them. Be patient, as we said, there are 77 names from the Middle Ages which we need to get through!

For now, can we introduce you to just a few of the Moon Gazer family:

My name is JigFoot – I embrace all around me and dance in celebration. I can’t keep my foot from dancing.

My name is Jumper – in spring I often can be seen jumping to box or simply for joy.

My name is Wild One – I’m a hare who is wild, mysterious and has captivated the imagination for centuries.

My name is Nibbler – I’m the hare who stops rushing as I nibble on the grass.

My name is White Face – my strength & sharpness are disguised in the beauty of the white mountain hare.

My name is Bouchart – I am a hare from the Dark Ages – French in origin; noble and distinguished.

My name is Pintail – a hare named after my short, erect and pointed tail which is smart and resplendent. 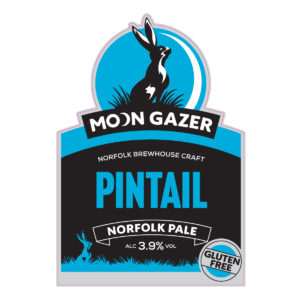 Look out on March 21 for the full story – we’ve more names and more to tell, so please get ready to Stop Staring and Start Gazing…