Moving forward, back to front… 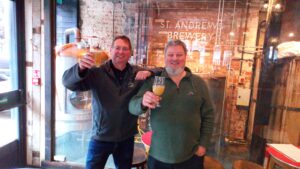 Team Moon Gazer is delighted to announce a new team member, as Steve Chroscicki joins us as brewer.

Steve is quite literally moving from one brewhouse to another. As lots of you will know he’s spent his last five years crafting brews at Norwich’s St Andrews Brewhouse.

It’s also a bit of a return home for Steve, as he and his wife Alex ran the Binham Chequers and its Front Street brewery for eight years. Back in 2005 this was his first foray into brewing. Indeed, this is where Rachel and me first met Steve as a brewing neighbour and customer and we are delighted to say we have kept in touch ever since. Actually, thinking back when I did my first brew Steve was also my Regional Director of SIBA so was responsible for welcoming Rachel and me into the brewing world.

So, when the position became available at the brewery we were delighted that Steve was able to join us, and return to his brewing roots in North Norfolk.

For those less familiar with Front Street’s brews they ranged from the sessionable golden ale Binham Cheer to the fuller bodied and pretty robust Belgian Winter ale Old Sid, which weighed in at a mighty 10.2% abv. To this day I always get asked by folk around here if I plan to replicate Front Streets Raspberry Wheat Beer.

He was no stranger to winning awards at the brewery either with a string of awards including those from the Society of Independent Brewers (SIBA), CAMRA and EDP Norfolk Food and Drink. His Ebony Stout was a regular award winner and showed his love of the darker beers, which continued when he started brewing at St Andrews Brewhouse, where his Tombland Porter has become a firm favourite – as well as scooping a list of awards including a 2019 Silver in CAMRA’s overall Champion Beer of Norfolk and a Gold for best Porter in the same year and a Silver in 2020.

Steve is also a fan of exploring beer styles and new beers – some of you may remember the collaboration that I did with him a couple of years ago when we recreated a medieval beer style using Oats – a Dutch Hoppenbier. A challenging brew but great fun, and although the outcome was a bit of a Marmite it remains one of my personal favourite Moon Gazer beers.

Its also one of Steve’s favourites and he is particularly proud of the description written about it by leading beer writer and critic Adrian Teirney Jones who said of it:
“Pale sunset colour, the kind of sunset you get after a hot day, and you know the day is about to change… soft luscious mouthfeel, with suggestions of lemon and oakness. With a very dry finish.”

I think that one may make a comeback at some point.

So, there will be plenty more new brews and collaborations to follow and we are also looking forward to him working with Andrew at the brewery who is loving getting more and more involved in the brewing side, which will continue as we build the team. Mind you Andrew joined us a couple of years back having worked as a bus mechanic, and I note that Steve’s first job was an engineer with London Transport. So, I am envisaging them in boiler suits reminiscing about torque wrenches and gear shifts over strong cups of tea!

So, in these strange times in which we are living it is that we start a new chapter in the journey of Team Moon Gazer.

Welcome to the team Steve and welcome back to North Norfolk.