New ale is a sign of the times – way back when… 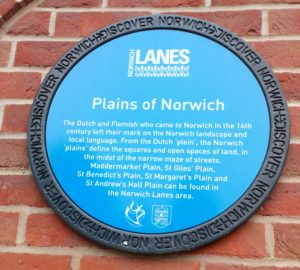 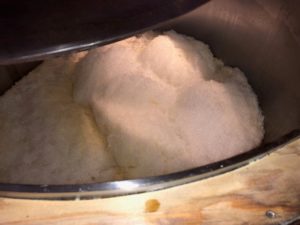 When you get two brewers together for a collaboration you can often expect the unexpected.

This is certainly the case with our new brew which we have created with Steve from St Andrews Brewhouse, in Norwich. It is also the case that the brew we chose led us to a lot of head scratching.

The journey into the unknown all stemmed from a sign outside the St Andrew’s Brewhouse which in summary highlights that the ‘Pleins’ area of Norwich was named by Dutch traders who were there in the late 16th Century.

So, job done – our collaboration beer which we are brewing up for this year’s City of Ale would be a Dutch beer recipe from circa 1600.

What could be simpler? The beer would have a fantastic link to historic Norwich and celebrate our past in a glass.
Well, little did Steve and me know what we had let ourselves in for.

Historic records of brews and beer styles abound, that was the was the easy bit, but what we hadn’t appreciated was that in 1600 Holland the beer style was known as a Hoppenbeer. Sounds OK? Well, yes, but not when the recipe states; 80% oat, 20% wheat, chuck in some fruit and a handful of hops.

Yes, that’s right, read the recipe again – there’s no barley in there at all.

Undeterred Steve and me were spurred on – well it sounded like fun!

However, since we had both only ever brewed with barley – like most normal people – this was well out of our comfort zone so time to turn to David Griggs at Crisp Malting who is a scientific wonder on all things malt.
David was able to point us to a paper by a group or eminent scientists and food technologists who back in 2011 had experimented with brewing with 100% oat malt with a view to seeing if it could help people with coeliac disease, since oat is gluten free.

I am first to admit that the 10-page study had lots of words, phrases and equations that I didn’t fully understand but the brewing process was clear – even though it was nothing like Steve or me had ever done before.
So, I will talk you through our brew day…

Mashing in – the stage where normally we soak barley at 65C for 90 minutes while we tuck in to breakfast. No such luck here. For starters the oats are much finer than the barley we normally use, and as they were ‘naked’ – meaning they didn’t have a husk – we needed to add some rice hulls to hopefully act as a filter and stop the oats simply dropping to the bottom in a cement like mass with a puddle of water on top.

That was tricky enough in itself in determining how much of a filtering medium to use, most research we could find pointed to between 2-5% of the total amount of malt – so we went for 6% allowing us 1% for luck.

Even this proved a wee bit of a struggle. As Steve poured in the oat, I added the hulls and stirred furiously with a spade to get a good mix.

Keeping up with the oats which seemed determined to get to the bottom took some doing and wasn’t entirely successful – but it was what it was and a pretty good job we thought.

The second challenge was that this was a stepped mash – meaning that rather than hold the mixture at 65C we started at a very low 45C for 45 mins and then needed to raise the temperature to a very precise 62C for the final stage.

Normally this would be done by having heating elements in the mash liquid, but we didn’t have that option, so while the first stage was doing its thing Steve was busy doing calculations on his laptop and then heating water. There was lots of mumbling and scratching and I took on the roll of just saying – ‘sounds about right to me’.

To his absolute credit he heated additional water, added it and when the temp probe was pushed in it truly read 62C!

Well, I was impressed.

At this stage you have to say the aroma from the mash was fantastic – sweet oats and very distinctive from the norm.

So far so good, on to the next stage of sparging the mash which involves pouring water on the top of the ‘oat cake’ and while drawing liquid (wort) off the bottom into the kettle ready for boil.

Standard procedure at this point is to recirculate some of the liquid at the bottom back on top of the mash to get rid of the protein sediments that would have sunk to the bottom. Now, usually this takes 10 minutes until the liquid is clear enough to move to the kettle, but we were not prepared for what we found.

The wort wasn’t just cloudy, quite frankly it was milk – and 15 minutes in to the process it was still milk, so with no reference books to say if it would clear we cracked on with the transfer for fear of the oats clogging the pumps. Now this process usually on Steve’s equipment would be an hour or so, but on this brew we were best part of 3 hours – but it was a consistent flow and sure enough after about 30 mins the wort was virtually clear.

By this time the brewhouse was smelling really nice and the good news was that the sugar readings which we were getting were very good.

While the brew boiled away Steve cleared out the used malt from the mash tun which did indeed have the consistency of a freshly made mortar ready for bricklaying!

Research couldn’t tell us which hops or how many – but it did point to the probability that the hops would have been French.

Having seen Steve show his technical expertise I stepped in here with some creative thinking – how can we find a hop which we can say has links to France and the year 1600?

It goes like this, Kronnenbourg is French, it claims to date back to 1664 – close enough for me – so what hops does it use? The hop is Strisselspalt, but we opted for a variety called Triskel which is cultivated from Strisselspalt and an English variety giving it bit more of a pronounced fruit aroma then the traditional lager hop.

We added enough to give us a bitterness level of 25 IBUs as we wanted to be above a continental lager style but not heading into best bitter territory.

As for the fruit the recipe referred to, we opted for orange and lemon peel since they would pull out the characteristics of the hop.

Hops in, fruit in, boil done, time to complete the process by adding the yeast.

When it comes to the yeast, we fess up to playing it safe, after all we were entering into the unknown regarding the fermentation. The scientific paper we talked about earlier showed a very slow process over several days – so we played safe and used a reliable Safale ale yeast to make sure we would ferment.

Boy and did it ferment.

With an original gravity of 1045 it went off like a train and when Steve looked in on it in the morning the fermenter was a mass of sweet-smelling foam – we had lift off.

And for now, that’s where the story ends.

The beer will be left to condition and the flavours develop. Its looking very light golden, it smells fruity and oaty. After a very challenging brew it has potential.

To find out more look out for the beer’s launch on Thursday May 23rd.