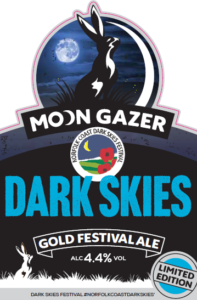 So, we are busy working on a new brew as part of this year’s Dark Skies Festival – a two-week long festival of events and activities hosted by the Norfolk Coast Partnership.

The festival takes place along the North Norfolk coast and will be a celebration of the incredible dark skies and landscapes of the county’s coastline.

Although we will predominantly be using hops to flavour the new beer we will be also adding some of these night-time flowers which are found around our brewery to add a gentle floral aroma and create the night time interest.
We hope that the ale – called Moon Gazer Dark Skies – will be enjoyed in pubs and hotels across the county and will help raise awareness of the value of Norfolk’s night time skies to tourists and residents alike, and that it is a resource that should be treasured and protected.

We obviously see the value of our dark skies in helping attract tourists to the county – especially outside of the summer months, but its value is also for residents as the calming, well-being effect of dark skies without light pollution adds to the tranquility which makes our county and coast so special.

The beer will be a golden ale, brewed using Maris Otter barley grown along the North Norfolk coast and will use British hops to give a gentle floral, citrus flavour. It will be available in pubs across Norfolk for the duration of the Dark Skies festival which runs between 6-22 September.

For details of events taking place for the festival and how you get involved visit: www.norfolkcoastaonb.org.uk #norfolkcoastdarkskies