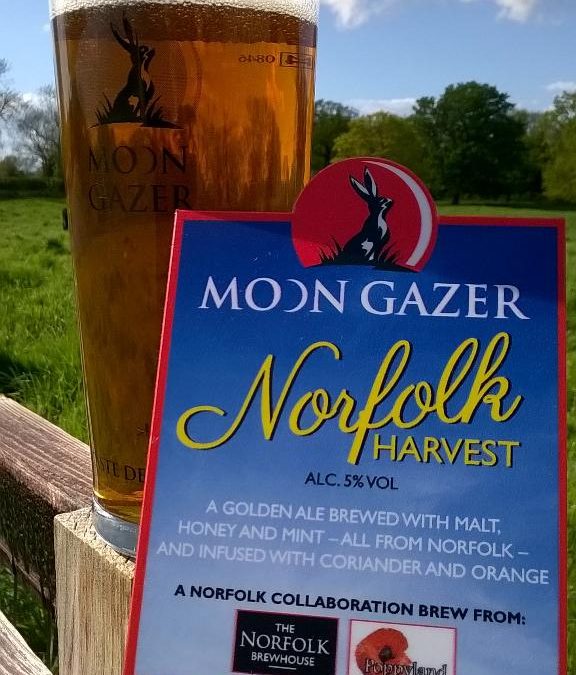 Tucked away as we are in North Norfolk the arrival of spring is always a fascinating and invigorating time, the pace of life tends to slow a wee bit over the winter months but come the spring and it’s not just the Norfolk countryside which bursts in to life – local business too get set for the busy summer ahead.

Spring has certainly been a busy one for the small team here at The Norfolk Brewhouse, starting off with the launch of our new beer Moon Gazer Norfolk Harvest.

Hopefully you would have read the tale from earlier articles on how this collaboration brew with Martin Warren of Poppyland Brewery, (based just down the road in Cromer) came about. Together we crafted a beer designed to celebrate the best of Norfolk.

It was a joy to brew with Martin and the beer was soon a sell out at pubs taking part in the ever popular City of Ale Festival, in Norwich, as well as appearing on bars across Norfolk. Feedback has been excellent, and we do have to confess to having a touch of nerves while the beer was conditioning – how would the combo of mint, honey, coriander and orange turn out – well we needn’t have fretted as it’s a well-balanced beer with some complex flavours. Judging by the response we hope to brew it again during the summer and are already working on a new collaboration with Martin – wait for it this time using tomatoes!

We will also be crafting a Smoked Porter with orange, another collaboration brew which will see us hooking up again with Jon Stringer, who brews at Ramsgate Brewery, in Kent. We first collaborated on a brew with Jon last year with our Moon Gazer Black IPA. The new porter will be much less of a hop monster, seeking to do add just a bit of a twist to this classic style.

Spring also saw us dust down the Moon Gazer gazebo ready to start attending food fayres and festivals across the county – the first being Cromer’s Crab & Lobster Festival which was a great community event for the town and one which we always love attending – check our events page for details of other festivals and events where you can come along and see us, and taste our beer of course.

One festival we hope none of you will miss out on is the Maris Otter 50 Beer Festival which we are organising. The event celebrates the 50th anniversary of brewing’s’ premium malted barley – Maris Otter and will feature 50 new beers from a fantastic selection of breweries. It’s hard work organising but will be a truly unique event and one which will again see ale lovers turn their attention towards Norwich and Norfolk.

Cheers again for all of your support – it means a lot.