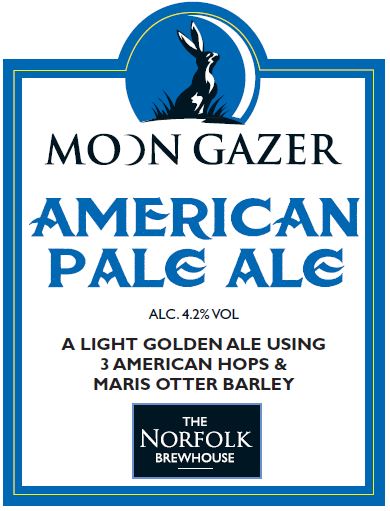 Here at The Norfolk Brewhouse we are proud of our regular range of Moon Gazer ales and the popularity they have amongst pubs and drinkers alike across Norfolk and beyond.

We also love to brew up some great special brews; award-winners such as Norfolk Harvest, Tidal Gold add a buzz at the brewery, and doing collabs like our Winter Porter and HopBean IPA add a further bit of interest to what we do.

However, managing the two always proves a bit of an issue when you are a small micro, you need to use capacity to keep your regulars in stock, so squeezing in a special here and there is the best we can do…until now.

The launch in July of our new brew – Moon Gazer American Pale Ale – will see the start of a regular series of one off brews, and hopefully more and more collab brews.

We have invested in a bit of extra fermentation capacity which, when fully installed will mean we will get to brew specials more regularly and explore new brews and beer styles.

The first of these will be our American Pale Ale.

At 4.2% it’s still an easy going, smooth session beer but will pack a fruity hop flavour from a combination of three American hop varieties; Centennial, Belma and Pekko. As the US and UK have a special relationship we have also included a little drop of the British Admiral hop for bittering. The starring role of aroma and flavour hops are all American though.

The base malt is, unsurprisingly for us, Norfolk Maris Otter, with a touch of Amber malt and also some Dextrin for mouthfeel.

As we write, this the beer is still in its conditioning tank, developing its flavours, so we can’t yet tell you exactly what it tastes like, but we can say that the brewery is smelling mighty fine and so we have high hopes.

Look out for it in early July; we will be delivering it to pubs w/c 4th July, to tie in with US Independence Day.

Enjoy and look out for news of our future specials and collab brews.