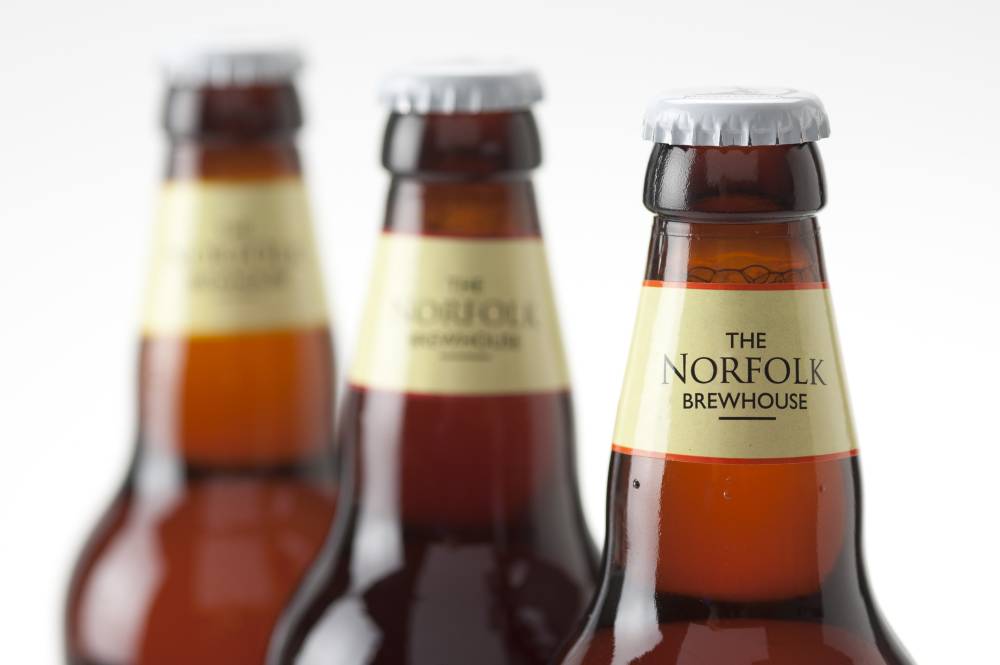 November proved to be a busy month at Moon Gazer barn.

It started with a bang at the Norwich Beer Festival which showcased three of our beers, went on to see the development of two new beers in collaboration with two fine local producers ( The Norfolk Sloe Company and Grey Seal Coffee) and we continued with planning for one of the beer events of 2015 – Maris Otter 50.

The Norwich Beer Festival, now in its 37th year is one of the country’s longest running and most successful festivals.

It is always great to have your beer showcased at your ‘local’ festival and Norwich & Norfolk CAMRA do a fantastic job supporting local breweries by running a Norfolk bar.

This year our ales on show were Moon Gazer Ruby Spice – a ruby red ale lightly infused with cinnamon, orange and star anise.

We also had one of our new beers – this one is a bit more of a Marmite drink. Some are simply bowled over by our Black IPA, a 5% abv ale as black as Guinness and crammed full of American, German and British hops – while others consider it too heavily hopped and bitter.

The truth is it was deliberately a bit more ‘out there’ than our regular beers, but when we developed the beer in collaboration with Jon Stringer ( Jon brews down at Ramsgate Brewery, in Kent) we wanted to create a talking point. We certainly achieved that and are delighted to have already sold out of two brews, and seen the beer enjoyed across Norfolk as well as in the Midlands, Yorkshire, Kent and London.

The final beer on show was our DewHopper craft lager which we were delighted was chosen by the Lord Mayor of Norwich to toast the opening of the festival.

We can’t let our review of this festival go by without passing on our appreciation to CAMRA’s Martin Ward who for the last 11 years has organised the festival and its army of volunteers superbly well. Best wishes in the future Martin and congratulations on establishing a beer festival which is the envy of many a city.

So, with Christmas fast approaching it was time to sort a festive ale. The choice was as easy one and Moon Gazer Ruby Spice was very well received at the beer festival – lightly infused and not overpowering and at 4% abv a more manageable offering than some of the stronger Christmas ales available. A limited number of casks are available and as they say, when they are gone they are gone.

We will also be offering limited edition ale during December and this one will be a bit stronger at 6.4% abv and is a collaboration with our good friends and fellow North Norfolk producer The Norfolk Sloe Company. The drink is a dark mild infused with Damson port to create a smooth, fruity and sweet ale.

It sounds simple but there was plenty of taste testings and samples to arrive at the chosen abv and flavour profile. We hope you enjoy it – it is called Sweet Darkness.

While we are on the subject of collaborations we are also testing a coffee beer with North Norfolk coffee roasters Grey Seal Coffee who are based a couple of miles down the road from the brewery.

These guys are roasting some absolutely fabulous coffee and we are going to blend a ‘cold brew’ coffee with our dark mild to create a North Norfolk coffee beer. By ‘cold brewing’ the coffee you extract heaps of flavour and aroma but none of the usual coffee bitterness, the brew is then conditioned in the cask with the ale and the flavours allowed time to combine.

We will be playing around with a couple of options and hope to have some testers for you to try in early December.

And, as if all that wasn’t enough November also saw our planning for MarisOtter50 reach a milestone as brand new brewer Lionheart Brewery became the 50th brewery to sign up to brewing a new beer for the festival.

The festival, which will be held at Open, Norwich 17-19 Sept 2015 is a celebration of the 50th commercial harvest of Maris Otter – the premium malting barley used by brewers in 20 different countries worldwide. Most of the barley is grown right here in Norfolk.

Since 2000 11 of the Champion Beers of Britain have been brewed with Maris Otter and we can confidently say that it is the most brewing awarded malt since its arrival in 1965.

To showcase the malt’s quality we have selected brewers covering the spectrum of commercial breweries – from craft nanos to established nationals.

It promises to be a great event and we are very proud to be co-organisers alongside Fakenham’s H. Banham Ltd. Tickets are going to be much in demand so do get yours early: www.marisotter50.co.uk

Anyway, that’s enough for now – thanks for reading and thanks for supporting The Norfolk Brewhouse.