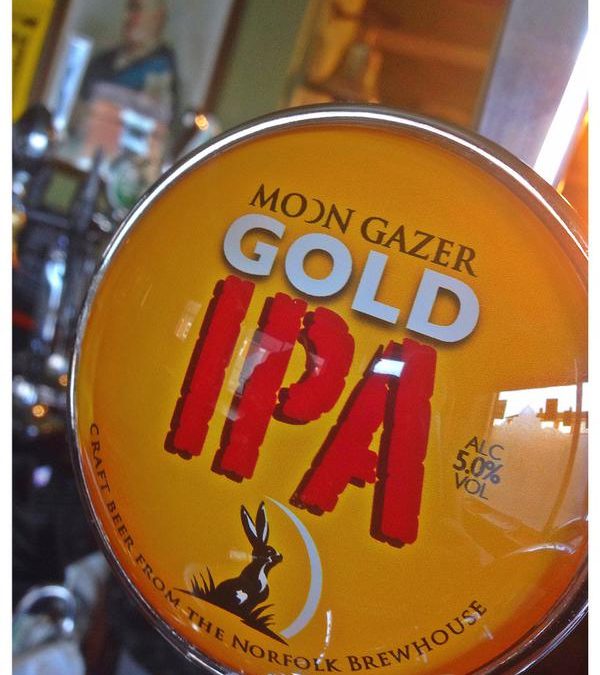 No your eyes don’t deceive you, it’s a Moon Gazer beer in craft keg.

Although we are proud to be best known for our cask beers there has been a growing demand and calls from pubs asking us if we have any plans to return to producing craft keg beers – having previously offered our DewHopper and StubbleStag lagers in keg.

Well the answer is a definite yes and the appearance of our award-winning Moon Gazer Gold IPA on craft beer taps such as the one shown at The Jubilee, St Leonards Road, Norwich is the sign of things to come – but don’t worry cask beer will still be our mainstay.

Voted best new beer at the 2014 City of Ale, the Gold IPA seemed the natural fit with the current interest in craft beer.

The beer uses Maris Otter ale malt as its base and is heavily hopped ( we’re talking chocka-block) with a blend of American and British hops, using hops such as Belma, Pilgrim, Mount Hood, Cascade and Columbus – a cocktail of flavours leaving a crisp, dry bitter finish with that American IPA bite, yet offering a soft, fruity aroma.

So, please do look out for it and try it and remember with this particular craft Norfolk brewer you get no nonsense, all taste craft beer. We’ll let the beer do the talking.

Look out in the spring for the return of our craft Norfolk lagers on the bars as guest beers.