Norfolk beer – it’s in the blood you know 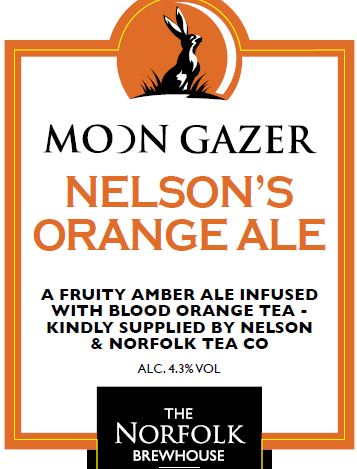 Now, we have Mark at the Nelson and Norfolk Tea Co. to thank for this creation, as when we used his Oolong Tea to brew with recently he very cleverly left me some of his fantastic Blood Orange tea.

Well, he had me hook line and sinker – the aroma is fantastically fresh and fruity – think US aromatic hops in turbo charge. A blood orange Moon Gazer just had to be done. So, we laid down the challenge to Bruce to get his recipe hat on.

Now, blood orange beers are not new – they’re not widespread either – Beavertown’s Blood Orange IPA is an example of just how this flavour really works in beer – while a host of US brewers have a Blood Orange Amber ale on their list of regulars. Trust us it really works!

At 4.3% abv we hope our beer will be a wee bit more accessible than some of the high strength options out there.

Maris Otter forms the base – yep it may be predictable but here at Norfolk Brewhouse we stick to the very best Norfolk has to offer! We are also using other malts including; amber, crystal 400, wheat, rye and Vienna malt.

The addition of the Vienna malt will add richness with slight toffee and caramel notes without masking the hops or the Blood Orange tea. It also gives an orangery hue to the beer. The rye and Crystal 400 are only in small quantities to add little more depth to the orange / light amber colour in the final product. It’s all in the detail you know.

As for the hops – we are using Mount Hood as the base hop while Admiral, Cascade and Motueka play a supporting role before the star turn of the Blood Orange tea.

A combination of these hops will give citrus, (orange and lemon) plus floral notes.

As for the name – well we had to give a name to check to the Norfolk company supplying the tea – so Nelson’s Orange Ale seemed to fit the bill.

Brewed next week the beer will be in pubs across Norfolk from 9th October.

Do look out for it, enjoy it and do check out Mark’s teas as well!