Norfolk Born and Raised – our all new Session IPA 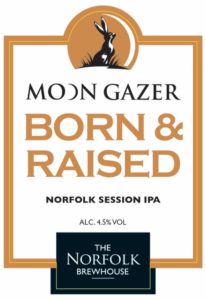 Last month we launched a new Session IPA – an ale style which lacks the alcoholic strength and crisp bitterness of an IPA but more than makes up for it in flavour and aroma.

Well, it went down so well that we figured that we should bring out another one, well just brewing the same beer again would be far too easy, better to see if we can craft another recipe.

This time we decided to give the ale a name to celebrate the brewery’s Norfolk heritage – so Born and Raised was chosen as its name for our latest new beer.

OK, we have to fess up a little but as it is a slogan used over in America by Smartmouth Brewing in Norfolk, Virginia. We will be collaborating with those guys for Norfolk Day next year by the ay so look out for something special.

So, back to our Born and Raised.

For us, a Session IPA aims to be distinctive from both an IPA and a Pale Ale – yet at the same time it need to take
the best of both.

First off, the abv is 4.5% – strong enough to balance the hops but light enough for you to enjoy one or two.
Secondly it will use bolder hops than our Pale Ales – so as to provide a great flavour but also pack a hoppy punch.
It will be orange/amber in colour with a fairly complex layering of hops.

Building from a subtle base of using Equinox hops for the bittering leading into Citra, Mosaic and Belma with a light dusting of foraged Fuggles hops which were kindly collected and provided to us by a very nice Mr Brookes of Edgefield.

This beer really should be a crowd pleaser for the Session IPA drinkers. Great aromas with developing flavours and then a big kick of grapefruit, lime and mango from the American hops.

The malt is pretty much all Norfolk Maris Otter as you would expect from us here at the Brewhouse although a touch of wheat and Crystal are sprinkled in to the mix.