The success of the first Norfolk Day in July did not go unnoticed overseas and we’re thrilled to announce that next year’s event will be celebrated in America – and that an awesome craft brewery from America will be joining us here in Norfolk!

We’re brewing up a collaboration brew with the team from Smartmouth Brewing Company of Norfolk, Virginia.

This ambitious project will see the American brewery visit us here in Hindringham to brew a celebration ale but will also see team Moon Gazer and some Norfolk grown Maris Otter barley shipped to America so that Smartmouth Brewing can brew up their own twist of a ‘Norfolk’ ale.

This will mean that beer lovers on both sides of the pond will be able to raise a glass to Norfolk next July.
As with many of these ideas it came about with a casual chat. I was with Radio Norfolk’s Kirsteen Thorne and Debbie Bishop during an outside broadcast about this year’s celebrations, and one of us quipped about how next year we should do a broadcast from Norfolk, Virginia.

Well, for me that was enough and the seed was sown and the gauntlet was laid down. I just had to make it happen.

OK, I guess I am well known as an ambassador promoting Norfolk’s Maris Otter barley and also for international brew collaborations but was this a challenge too far?

Well, I was straight on the case and contacted Smartmouth Brewing – a renowned craft brewer producing awesome craft beers.

To my absolute delight they had been aware of Norfolk Day and seen some of it on social media and also had contacts with the Sister Cities Organization (keen to promote activity between the two Norfolks) and were only too keen to come on board as they loved the heritage and links.

Norfolk Virginia does actually owe its name to a prominent family from King’s Lynn. Adam Thoroughgood – the ninth son of the Rector of Grimston – became a military officer and colonist and in the 1620s settled in an area south of Chesepeake Bay a few miles inland from the Atlantic Ocean, naming part of this Royal Colony Norfolk to remind him of home.

So, now some 390 years later it’s great that the two counties will create a beer and the Smartmouth brewers are thrilled at the prospect, as brewery President Porter Hardy explains:

“When David got in touch we instantly thought that would be fun, but on a serious note the ability to cement the links and history of our two Norfolks through the power of craft beer is going to be a great challenge and also opportunity. To help bring the two communities together is something we are very proud to be involved in.”
“Everywhere you look there are links and the fun of it, even with my surname you could say we are reuniting Nelson and Hardy once again!”

We’re now busy working on recipe ideas which will take the best of both worlds and showcase the Maris Otter grown in Norfolk and malted at Crisp Maltings, in Great Ryburgh.

We plan to do a golden IPA style beer at 5% for cask but also a craft keg beer which is a bit more unusual, maybe a saisson, but watch this space. We also plan to launch Smartmouth’s range of canned beer in Norfolk, and arrange a keg Tap taekover too – so we have plenty to work on.

By the way a big thanks to Crisp Malt and H Banham Ltd (the guardian of Maris Otter) for their support and help in making this happen.

“We are very fortunate that Norfolk barley – in particular Maris Otter – has a global reputation for quality and craft brewers demand it from all over the world. When it comes to America we have a large number of customers who insist on Norfolk malt and so to be able to be involved in this project will be a great privilege.”

“It’s an exciting opportunity and we look forward to tasting a glass of the collaboration brew on both sides of the Atlantic.”

Also, if you’re a CAMRA member stay tuned and look out for a competition which will see one of you join us on this journey.

Its going to be a great project and as a team we are so glad that Norfolk Day 2018 sparked something so great in its first year.

The beers will be available in Norfolk -England and USA on July 27 2019. 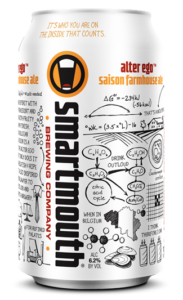