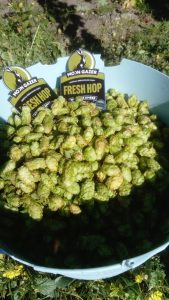 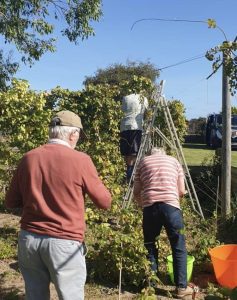 Three years after Ian, Ralph and the guys from the Sheringham Horticultural Society first planted Sheringham’s very own Moon Gazer ‘hop farm’ we are out delivering this year’s brew – the second year we have been able to use the local hops.

The good news is that as the hops are becoming more established their bounty of flavour is becoming more plentiful.
In fact, it was such a bumper harvest that we nearly couldn’t pick them all in time for the brew.

That said we still only have enough hops for one brew so it is a genuine limited edition, just 38 casks of beer.
As we did in 2018, this year, we also took on the Bird’s Eye challenge and aimed to get the hops picked and in the brew within the hour – now you can’t get much fresher than that.

The result is a beer bursting with fresh flavours and showing the hops at their absolute maximum.

Just by way of a quick reminder as keen horticulturalists the Sheringham guys responded brilliantly to my rallying cry during a meet the brewer session to see if they could combine their hobby and a passion with bringing the community together and celebrating with a local ale.

The Fuggles hop has established particularly well but in fairness all 4 varieties are doing well enough that the guys tell us plans are afoot to plant even more next year!

We did of course be use locally grown Maris Otter malt for the malt with a sprinkling of Crystal to give a light amber coloured bitter.

Norfolk water from the brewery’s well, Norfolk malt and home-grown Norfolk hops – this truly is to be a taste of North Norfolk.

Arriving in pubs across Norfolk from today folks.