Norfolk pubs rally round to support the cause… 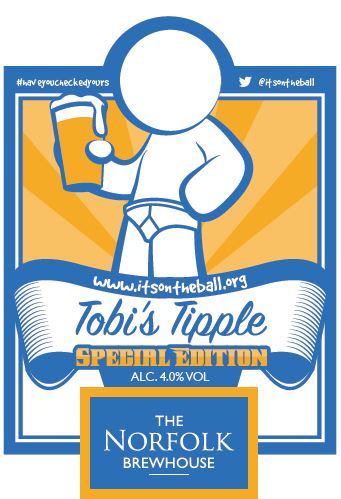 ..as Tobi’s Tipple gets special treatment.

Our charity ale for January is already creating a bit of a buzz and we haven’t even brewed it yet. The brand new recipe is sorted, hops and malt ordered and it will be ready to be launched in pubs across Norfolk throughout January.

OK, we admit that the name may not be that new, as we already support It’s On the Ball with a bottled version of Tobi’s Tipple and the name really works – you can’t go wrong with a good bit of alliteration.

However, we need fans of Tobi’s Tipple to know that the cask version is completely new, and differs in both colour and taste. So, after much soul searching and lots of ideas from social media we ended up back at Tobi’s Tipple – with the simple addition of the words Special Edition.

While the naming may have lacked a wee bit of imagination it has certainly captured the enthusiasm and support of over 50 Norfolk free houses already that have ordered the beer and will be serving it.

So, a MASSIVE thanks to all those pubs who have already pledged their support, but we hope to add plenty more yet.

Creating a new beer is always fun and creates interest but this campaign is slightly different.

The month of January was chosen as it seems to have become the month where community pubs which provide a great service all year round seem to come under pressure. Money is a bit tighter as are the belts on the waistlines and so visitors numbers are traditionally down. In recent years this ‘downturn’ has been compounded by a succession of campaigns encouraging people to not visit pubs.

So, we are coming out fighting and using January to show just how pubs can be a cause for good.

The new ale will hopefully attract attention and get people talking – and knowing full well that not all people will like all beers, whatever drinkers may think of the beer we hope it makes them stop and think.
You see, testicular cancer, which Tobi’s Tipple raises awareness for, is actually the most common form of cancer among young men. That probably will come as much a surprise to you as it did to us. The thing is that often small charities whose topics may not be the easiest of coffee table chit chats can struggle to get their voices heard above the crowd of other more mainstream charities.

Whilst still very rare, in many cases testicular cancer will already have spread at the time of diagnosis, but more than 95% of patients will be cured. So it’s a no brainer, by spreading a simple message we can very easily save lives.

And that is our primary motivation – to save lives – just by having a pint and a bit of chat in the pub.
It’s simple – pop to your local in January, order and enjoy a pint of Tobi’s Tipple, take time to read about it and tell your mate, who will do the same. Before we know it more and more young men in Norfolk will get the message and hopefully check themselves out, or at least know what to look for.

That’s all we ask, hopefully the pubs will join in the fun and we can look to raise some money, or get photos of you drinking beer in Tobi’s pants – but that’s a bonus – you can do your bit simply by talking about, retweeting or liking what we do. Reading the facts on the website will help even more.

We got involved in the charity for many reasons, but one key reason is that they are a small, dedicated and lovely team who deserve all the support Norfolk can give them – so come on Norfolk check them out : http://itsontheball.org/#sthash.fYvMykVg.dpuf

So, do please look out for our new ale, and give it a try in January. Also ask your local to look out for it – we can brew plenty more if they want to order it.