Oolong do ya have to wait for a tea beer? 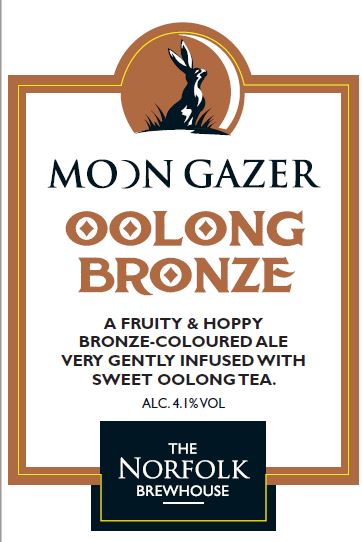 Well, the cheesy answer is not long now as our latest new brew – an Oolong bronze ale will be heading to pubs at the end of June.

Lots of you will hopefully remember our coffee beer with fondness, the aptly named HopBean IPA. That beer was a collab with Martin from Poppyland, and GreySeal coffee supplying some expertly cold brew coffee.
So, we thought the time was right for a tea beer. Ok, we may be a bit behind the curve here as Earl Grey beers have been delighting beer lovers for a good couple of years now. But hey, is it just me or do they all seem to use Earl Grey?

That was to be our starting point – don’t just play copycat brewing, look to do something that’s little bit different. After all, it would be a bit dull if we brewers all used the same American hops – so why all use Earl Grey?

Following a bit of investigating we (aka Bruce) discovered the Oolong tea variety from China. At the time of writing we are awaiting the final sample from Norfolk tea gurus, Nelson and Norfolk Tea Company who are very kindly are helping us with the brew, but we will be using a variety which imparts sweet, fruity, nutty and honey characteristics to the ale.

Now, as with HopBean IPA we want the flavour of the tea to be apparent but equally we want you to be drinking a pint of beer – not crying out “pass the milk and sugar” to the bewildered bartender.

So, the beer sets out to balance the taste of the tea with the use of hops that will bring a light, mild, fruity flavour. The hops will be a combination of solidly reliable UK varieties – Challenger and Goldings, the superbly gentle Celia hop from Slovenia and the boldness of American Cascade.

As for the malt bill, well colour wise it had to be a nice rich bronze colour to replicate a nice cup of tea, so we use some chocolate Crystal and Caramel malt to enhance the base of Maris Otter.

With an effort of will bordering on the superhuman I will resist the need for tea clichés, but suffice to say are glad to get another new brew in the bag – ooops!

Look out for it, enjoy it. Now where’s that cucumber sandwich?