Pintail pops up on national TV 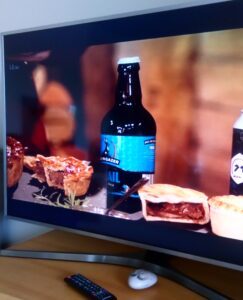 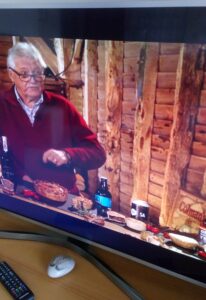 Well, it was proud pie and pint day when our Moon Gazer Pintail was featured on ITVs Love Your Weekend Show.

It’s been a rubbish year for so many of us and this was a real treat in amongst of the the other stuff we have had to deal with. It was a proud moment indeed to see the Moon Gazer bottle on TV and also the kind words from the tasting panel which included presenter, all round good egg and gardening guru Alan Titchmarsh, celeb chef Brian Turner, former MP turned train and travel buff Michael Portillo and actor Matthew Kelly.

The programme paired the very best of British pork pies and pints – a classic combo indeed.

Representing Norfolk with their iconic pies was Sarah and the team from Brays Cottage. We are so grateful for Sarah and Derek for recommending our ale for the panel to try. The team at Brays – who are based just a few minutes away from our brewery – use our Triskele Porter as an ingredient in one of their pies. However, for the tasting we sent along Pintail as we wanted something light and fruity to compliment the flavours of the pork and the pastry.

Thankfully the panel seemed to agree with such an array of beer styles to suit all tastes. Nice to get a mention that Pintail is gluten free and also the names of our beers named after hares.

Judging by the ‘mmmm’ count Sarah’s pies won the day!

To be fair it was a bit of a worry as having seen other shows the team can shoot from the hip – but we know Pintail is a perennial favourite with so many Moon Gazer fans and it seemed to win the panel over as well. Pintail uses Norfolk Maris Otter barley as well as the aromatic and flavoursome New Zealand hop – Motueka – to give it is crisp citrus flavour. We also throw in a bit of Cascade hop as well to add a touch more citrus depth.

On a wider note it was great for the pie and the beer to fly the flag for Norfolk in general and North Norfolk in particular. The county is blessed with so many artisan producers and there is a real sense of community amongst us, with collaborations, projects and pulling together a-plenty. Often, we refer to the army of gazebo gurus turning up at markets and events to share our wares and tell our tales. Sadly 2020 deprived us all of so many of those – so it was nice via the power of TV for a little bit of Norfolk endeavour to reach out to the nation.

A pie and a pint now what could be finer?

To find out more about Sarah and Derek’s team and pies visit Brays Cottage.

If you would like to taste some Pintail then you can order here for nationwide delivery.

Watch again – the episode can be found on ITV Hub – we are near the end.