Pondhopper is back in cask… 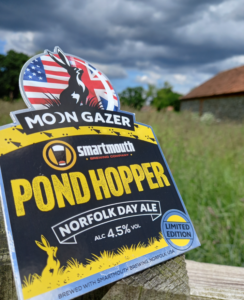 Since we first launched Pondhopper, our Transatlantic collaboration with Smartmouth Brewing it has been a firm favourite in Norfolk pubs at the end of July as a seasonal cask ale and an ever-popular permanent offering in can.

Originally brewed to celebrate Norfolk Day we have decided – well to be fair, you have decided – that this brew needs to be enjoyed on cask for longer and it will now be available from  the end of June in to August.

For those not familiar with the story of how this ale came about it was two Norfolk breweries wanting to big up all that is good about Norfolk on both sides of the pond. Obviously, Moon Gazer was one of those breweries in question and the other was Smartmouth Brewing in  Norfolk, Virginia.

From our point of view we particularly wanted to celebrate two things about Norfolk of which we are so proud.

Firstly, the farmers who grow Maris Otter barley – which is so renowned amongst brewers that it is exported from Norfolk to over 25 countries – and secondly the amazing pubs which are the cornerstone of so many communities across our rural county.

Two versions of Pondhopper were born – a 4.5% abv British version, a light amber  ale using Maris Otter barley and a mix of American and UK hops, as well as the addition of lemon, orange and pineapple  while the Norfolk USA version of the same name was slightly stronger at 6%.

Our Pondhopper UK has a soft bitterness, with a growing fruit and citrus finish but also a nice malt biscuity sweetness. Easy drinking and perfect for summer sunshine – a contemporary ale but with a nod to traditional pale ales.

Both ales were launched on Norfolk Day.

As part of the launch Porter Hardy, President of Smartmouth visited Norfolk with his family to enjoy a taste of the cask ale.  During his visit to the UK Porter got to visit the Maris Otter fields and also Crisp Maltings.

We have continued to brew the beer each year and become good friends with Porter and his family, and while the pandemic has so far [prevented us from making a return visit to Porter’s brewery it will happen one day soon!

Available NOW and throughout July and early August.