Pubs team up to face Covid Challenges together 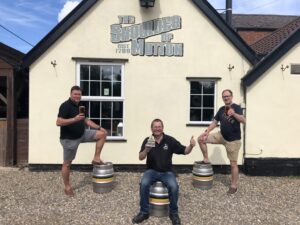 Faced by the challenges of closure during lockdown and reduced capacity on reopening two pubs have joined forces to their mutual benefit, to help protect their businesses and create an exclusive new beer.

And the good news is that they chose Team Moon Gazer to help them out.

The two pubs, The Shoulder of Mutton, in Strumpshaw and The Wig and Pen, in Norwich are run independently, but chatting over a pint the two landlords; Bob Cameron and Craig McLaren hatched a plan to help each other and encourage ale lovers back to their pub:
“Lockdown was a shock to the system but it also gave us time to reflect on what we offer our customers.” said Bob Cameron.

“Real ale is a big part of what we do at the pub, and during lockdown I was busy out and about in the surrounding villages doing home delivery, often to pub customers but also to new people who had never visited the pub.”

The recurring theme Bob would hear on his delivery duties was the importance of community and local identity and also how important the pub had been in keeping a sense of normality. It was rewarding times but also worrying, not knowing one week to the next what the future of the pub industry was or when it would reopen.

Touched by the support Bob – who offered a wide variety of ale on his takeaway service from those Norfolk breweries who were still brewing – also got great feedback on the style of beers the local community liked.

“On one of my delivery runs I thought it would be nice to capture in a beer not just the tastes that people had described to me but also to have an exclusive beer which could put our own stamp on – if you like it was a beer created out of lockdown for the community.”

By contrast, Craig at the Wig and Pen, in Norwich, had had to close completely during the lockdown period with his main customer base being the surrounding offices and courts which all lay shut or virtually empty. However, chatting to Bob he shared his passion and loved the idea of creating a new beer to pull people into the pub, as he explains:
“By pooling our resources, we were able to approach the team behind Moon Gazer ales, at The Norfolk Brewhouse, and ask them to brew a new recipe just for us, whereas if we were to act individually, we probably wouldn’t have been able to order enough to allow them to do it.”

“Fortunately, David at Moon Gazer loved the idea and set about creating the beer.”

Whilst the recipe was important so too was the name – it needed to fit in with the brewery’s hare them which runs through all of their beers, but also it needed to reflect that it was a beer to communicate the importance of pubs and community.

‘Hare Today’ seemed to hit the spot and is a hopefully a reminder that pubs are there for you but also that as we have learned they can be taken away form you. However, as businesses recover the team hope it will be Hare Today and forever and not Gone Tomorrow as happened on lockdown.

Hare today is a golden amber ale using Norfolk Maris Otter as well as French and British hops with a zest fruity finish.

It will be available from both pubs from 21st August.