Raise a glass to Norfolk Day and our farmers 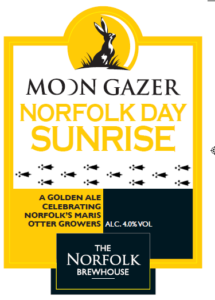 Drinkers attending the country’s biggest beer festival in London will be raising a glass of Norfolk ale in celebration of Norfolk Day and the county’s farmers – all thanks to one of our two new beers brewed for the day.
We have brewed two beers; Norfolk Day Sunrise and Sunset with over 6,000 pints due to be served on Norfolk Day across the county.

We were chuffed when the organisers at The Great British Beer Festival, which is helped at Olympia, in London heard of the brew they wanted to join in too, and so drinkers will be able to raise a glass to the country’s premier malting barley growers when the festival opens on 7th August.

We hope the beers will be a celebration of Maris Otter the globally renowned barley used by craft brewers across the world – and grown for them in Norfolk.

We are truly passionate about Norfolk barley and its growers – as Maris Otter barley is one of the county’s great success stories but one which often goes unnoticed, so the idea is to use the ales to highlight just what a great job this community of growers does, without which we brewers would be a bit lost.

Testament to their effort is the fact that Norfolk Maris Otter is exported to over 20 countries, and it is a source of pride to know breweries from Japan, America and all over the world insist on Norfolk malted barley.

It’s great that pubs and communities can celebrate this on Norfolk Day but we are thrilled that word had spread to London and they wanted to join in the party!

The Great British Beer Festival is held at Olympia and runs from 7-11 August.

On Norfolk Day – July 27th – over 50 pubs across Norfolk will be serving the Norfolk Brewhouse ales, so do raise a glass and thank the framers without whom there wouldn’t be beer.