Raising a glass to Norfolk Day 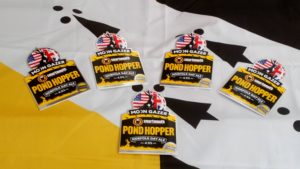 A very special new Moon Gazer which celebrates our fabulous county of Norfolk and our links to Norfolk, Virginia USA will be served in over 70 pubs this Norfolk Day.

We also hope that it will be the start of many trans-Atlantic Norfolk Day celebrations and relationships.
We had great feedback to the story behind our first Norfolk Day beer last year – where we brewed a special Moon Gazer ale to celebrate two things about Norfolk of which we are so proud.

So, this year we wanted to use the opportunity to reach out to other Norfolk’s and were absolutely thrilled when Smartmouth Brewing, in Norfolk Virginia, said that they wanted to be part of the celebrations.

We’ve been working on recipes for two beers, the Norfolk Day UK version, named Pond Hopper will be a light golden ale using Maris Otter barley and a mix of American and UK hops, while the Norfolk USA version of the same name will be slightly stronger and will be launched at Smartmouth Brewing tap along with a visiting British fish n chip van.

Norfolk Maris Otter will be used in both brews and we also arranged for a new UK hop variety called Mystic to be supplied to Smartmouth.

We really want this to be the start of stronger connections, by all sorts of people and organisations, between the two Norfolk’s as we share so much history between us. The interest that it has already created and the willingness of our UK suppliers to help out shows there is much we can do.

The Norfolk Day ale will also be spreading the word in London at the world’s biggest beer festival – The Great British Beer Festival – where it will showcase on our Moon Gazer brewery bar between 3 and 9th August.

So, if you want to raise a glass to farmers and pubs, or to whatever makes you proud to be in Norfolk then pop along to your local and enjoy a pint of Moon Gazer Pond Hopper.