Raising a glass to Tony with an all new Harvest Special 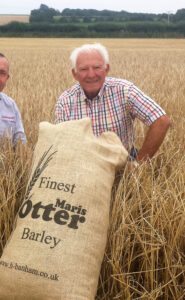 Of all the special ales and collaborations which we have brewed over the last 10 years at Moon Gazer – brewing Tony’s Tribute was one of the most rewarding and poignant.

The team here at Moon Gazer are very fortunate to have known Tony – and be inspired by his passion for barley, beer and his Norfolk heritage – and specifically his role in saving the Maris Otter barley variety.

We are also lucky enough to call him a friend of the brewery and know him for the true gent that he was – and also to call his son Mark a dear friend. Indeed we teamed up with Tony and the H Banham team to promote Maris Otter with a brewery bar at three CAMRA Winter Beer Festivals and even raised a glass of Moon Gazer with him at Parliament.

To have created a special tribute ale for Tony was great, and not just because the beer tasted fabulous but also because so many people across Norfolk were able to appreciate Tony’s contribution to farming and brewing – and to make the connection that, in Norfolk, celebrating grain to glass is in our nature!

Also, so many people asked if we were going to brew the beer again since they enjoyed it so much.

The first brew was a collaboration brew which was a great thing to do but this time the  team wanted to create our own unique thank you Tony brew – and so we have come up with a plan for a Harvest Special so that we can all raise a glass to Tony after this year’s harvest of Maris Otter is safely in off the fields and farmers have their traditional harvest celebrations after a busy summer.

It will again be limited edition and will also be in vey small batch bottles – so get you orders in soon!

Cheers to Tony – missed but not forgotten.