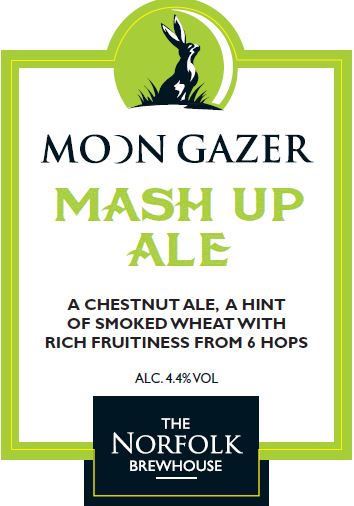 So, we’ve all seen the programme – folk rock up with a carrier bag of ingredients and the celeb chefs have 20 minutes to transform a hotchpotch of ingredients into a meal fit for a King or a Queen.

By and large they achieve it and make something pretty damn special. OK, admittedly they do leave some of the ingredients out as they won’t work, but culinary delights are, indeed created.

Well, such was the inspiration of our – now to be annual – Mash Up Ale.

You see, here at Moon Gazer ale we use many specialty malts for certain brews, for example the Winter Porter will include an Oak Smoked Wheat and some de-husked Cara malts, while our Chocolate Orange Stout has some great Brown malt.

The thing is, like Chefs we use precise amounts for recipes but have to buy in big bags – the result is for our special brews we tend to form the brewer’s equivalent of a larder full of opened, rarely used gems.
So, Rachel effectively turned our malt store into the equivalent of the Ready, Steady, Cook carrier bag and challenged Bruce to see what he could craft from the rather special but rarely used malts.

Just like the TV show Bruce was quick to put to one side malts which just wouldn’t work – after all we wanted to produce a show-stopping ale – not simply use up malt. That said, he quickly identified 6 malts which would balance well and produce and interesting flavour combo that wouldn’t naturally have sprung to mind – a good biscuity backbone, a hint of smokiness and a malty caramel finish.

Then, attention was turned to the hops – it seemed only fair that 6 malts deserved 6 hops – and the same ‘cupboard’ clear out principle applied, although to my slight dismay some of my new and very special Azzacca hop appears to have been used.

The other hops included were; Chinook, Mount Hood, Pilgrim, Admiral and Northern Brewer – all really strong hops which were used to give a real fruitiness to the brew.

So, that’s it – a brew which will be a genuine one-off, never to be repeated as the cupboard may well be bare next time.

However, every year, at about this time of traditional spring cleaning, Rach or me will walk into the malt store and present Bruce with a proverbial carrier bag of ingredients and shout very loudly – Ready, Steady……..BREW.

And so Mash Up Ale was born.