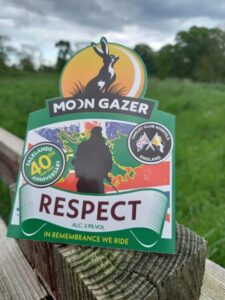 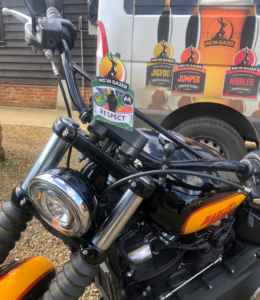 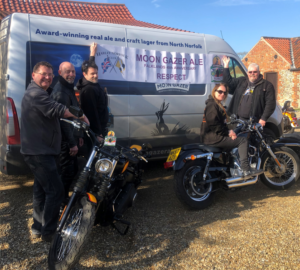 We are delighted to be brewing this very special commemorative light amber/straw coloured ale.

It’s not everyday that 3 shiny Harley Davidson’s rock up at the brewery and ask you to brew a beer for a special commemorative ale for them – but that is what happened when Rob and some fellow bike enthusiasts arrived at Moon Gazer barn recently.

Each year the Harley Club Norfolk carry out a Ride of Respect which visit the graves of fallen servicemen, something what started since a lot of the club’s riders are ex-servicemen and in particular a lot have connections to the parachute regiment.

Rob, who runs the Harley Club Norfolk, will join in their show of respect by riding across Norfolk from King’s Lynn to Great Yarmouth on 12 June.

Since this year marks the 40th anniversary of the ending of the Falklands conflict the official Ride of Respect will see 4 riders going to visit the graves of those servicemen left in the Falklands, in support of South Atlantic Medal Association 1982 (SAMA).

The Harley Club Norfolk, want to also show they stand with those riders doing this epic trip.

However, more than that they wanted to produce an al so that people from across Norfolk can raise a glass to the servicemen who gave their lives.

We are delighted to be brewing the ale which will be a light amber ale using Norfolk Maris Otter and two UK hops, one called Epic and the other called Endeavor – to represent the efforts Harley riders put in to remember the fallen and show their respect, not just in this 40th anniversary year but each and every year.

The hops will give the ale blackcurrant, lemon and spicy characteristics.

The ale will be available across Norfolk and Suffolk from late May – mid June – so please raise a glass to the servicemen and also to the Harley Club Norfolk, for keeping memories alive.