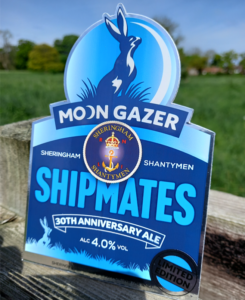 We are delighted to be finally helping a local Shantymen group to celebrate its 30th anniversary by brewing a special ale for them – appropriately named Shipmates.

Well, to be fair we first brewed this ale in March 2020 but a certain pandemic stopped its in its tracks. That said it formed the foundation for our Hare Today which we brew exclusively for the Wig and Pen and Shoulder of Mutton. However, now the shantymen are back out and singing we have released some of the brew under its original Shipmates label as it was originally intended.

As an added twist 16 of the Shantymen popped along to Moon Gazer barn on the original brew day in 2020  to sing the beer along its journey and to wish it luck.