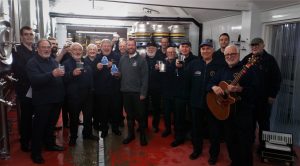 We are delighted to be helping a local Shantymen group to celebrate its 30th anniversary by brewing a special ale for them – appropriately named ShipMates.

As an added twist 16 of the Shantymen popped along to Moon Gazer barn on brew day to sing the beer along its journey and to wish it luck.

The beer – appropriately called Shipmates will be available in pubs from 20th March.

10p from every pint sold will be donated to the RNLI.