Six of the best as Team Moon Gazer scoop 6 awards 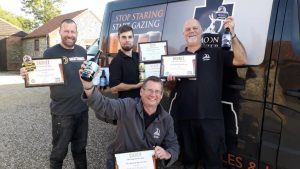 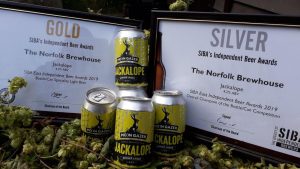 We were thrilled to walk away with 6 awards from this year’s Eastern Region final of the Society of Independent Brewer’s Awards (SIBA).

The awards are held every year and are open to all SIBA members across seven counties in the Eastern Region, with brewers entering their very best beers in a range of categories for blind tasting.

Crucially any beer which is awarded a Gold will automatically be put forward to the national final in March next year, where winners from all regional finals will go head to head.

That’s great news for us and fans of our Jackalope ginger lager as it was awarded Gold in the speciality light beers category for cans and bottles. As if this wasn’t honour enough for our first foray into the can market, Jackalope was also awarded silver in the overall judging which ranked the cans and bottles from all categories.

It sure makes the peeling of 35kg of fresh root ginger all the more worthwhile when you know your peers rate the beer so highly.

We were also delighted that our DewHopper Norfolk Lager won a silver. OK, a tad disappointed as twice it has won gold, but every year it has been in the awards it has come away with a medal – which we think makes it the most awarded Norfolk lager there is.

For those of you who recall our Norfolk Day collaboration with Smartmouth Brewing from Norfolk Virginia USA, well that won a bronze in the cask premium bitter category (4.5-6.4%) so not a bad debut performance from a beer which we think will be around for a long time to come.

Completing the line-up of awards was bronze for our collaboration Norfolk Ale which we are proud to brew for local Michelin starred chef Galton Blackiston, and also a bronze for our Triskele porter in the cask specialty medium to dark beers category.

We are also proud that all of our award winners use Norfolk Maris Otter malt – another Norfolk champion in our view.

So, there you have it six of the best.

Thanks again for all of your support and rest assured that despite all of the award success here at Team Moon Gazer we know that you are only ever as good as your last pint.