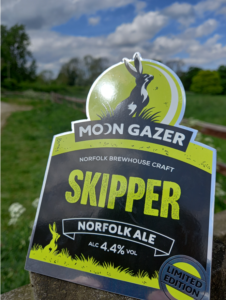 Welcome to our all new SAA – Summer Amber Ale

Well, who says pester power doesn’t work? When it comes to our latest ale it does.

First brewed in 2019, Skipper is set to launch our very own beer style – an SAA – a new Norfolk style Summer Amber Ale.  Ok, it may be a bit made up name but seems to us that everything has to be a West Coast this or and Est Coast that these days – so we thought we’d introduce our own buzz word.

So, just what is a Moon Gazer Skipper SAA?

We wanted Skipper to have a nice pale ale feel to it, plenty of hoppiness and flavour but to be a soft easy drinking ale as well – a pale ale meets a session IPA you could say.  Light amber – not quite golden but still a nod to summer drinking.

We also wanted the beer to have quite a complex mouthfeel and malt profile, so joining Maris Otter in the mash tun was a healthy dose torrified wheat, brown malt, crystal malt and a sprinkling of oats.

Backing up the US duo is a hop called Admiral – a British hop we are increasingly fond of due to the smooth orange character it can bring to a beer and also another Brit – Ernest – the citrus hop which forms the backbone of our spring favourite Ostara.

As a nice summer beer don’t expect a hop explosion – think subtle flavours and balance, but certainly and easy drinking ale for summer.