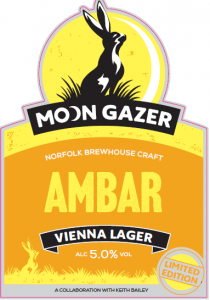 OK, I fess up, as I sit scribing news of our latest collaboration brew, I am doing an intolerably bad impression of Midge Ure as I’m one of those old enough to remember Vienna the first-time round.

To make matters worse my mouth has started an even more tuneless rendition of ‘Shaddapp You Face’ the song famed for keeping the Ultravox ‘classic’ off the No.1 spot back in 1981.

Right, back to the beer.

The reason for exercising my tuneless tonsils is that our latest collab is a Vienna Lager created by local beer enthusiast and home brewer Keith Bailey.

Keith is a member of the Anglian Craft Brewers whose members have recently battled it out with their home brews to win the prize of seeing their beer scaled up to a commercial level and showcased at the Norwich Beer Festival.

Having impressed the tasting panel with his 5% Vienna Lager – Ambar – Keith will be working with our brewer Bruce to take his brew into a commercial brew.

It’s also a bit of a challenge as both Bruce and Keith are keen to replicate the brew which won the plaudits but also take the opportunity to see if it can be pushed that little bit further.

So why a Vienna lager?

Keith – whose first foray into homebrew was back in 2010 using a converted picnic cooler and plastic bucket – always liked brewing lager and felt that it would help him stand out as most brewers in the competition were typically entering pale, hoppy styles.   Keith felt there was a gap in the amber coloured ales, and by producing a dark lager he would challenge the perceptions of a lager being pale golden, bland and fizzy.

It is also a style where simplicity does stand out – so as Keith puts it there is no hiding place for the brewer, everything has to be spot on.

Our challenge is to take Keith’s recipe and not only scale it up but see how we could add any new twists.

Vienna lager was actually inspired by English maltster’s air kilning techniques – when back in 1841 an Austrian called Anton Dreher experimented with this English way of kilning to create a slightly caramelized amber malt resulting in a reddish-copper lager with a delicate, slightly bready malt profile.

The beer was released as “Vienna Lager” and so a style was born.

Brewers from neighbouring Germany took this technique back from Vienna to Munich and the malt styles of Vienna and Munich were created and launched.

For our brew Vienna and Munich malt will make up 95% of the malt recipe whilst a touch of caramalt and wheat will contribute to mouthfeel and complexity.

For that touch of authenticity, the Vienna malt is to be imported from specialist German maltsters – Weyerman – although for balance the Munich malt from Crisp Maltings will add a touch of Norfolk flavour to the beer.

The result will be a lager which is a clean crisp beer, burnt orange in colour with a lightly toasty flavour and a residual caramel sweetness.

As for the hops we will be adding a gentle bitterness with floral, herbal and pine notes by using the German Hallertau hop and the Magnum hop from Slovenia.

Bold, hoppy and ‘out there’ is certainly not the intention for this beer, just a good solid, easy drinking beer true to its style.

We are delighted to be brewing with Keith and grateful for Norwich CAMRA for giving us the opportunity. The beer will launch at the Norwich beer Festival in October and will be available in a limited-edition cask version and Key Keg version at pubs in Norfolk.

Enjoy the beer but please do refrain from singing either of the aforementioned tunes whilst doing so.