The ale of friendship – savour that beer 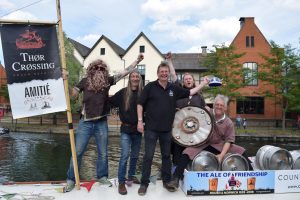 It’s not surprising that as we start on the road map out of a very strange year indeed, that so many of us crave a simple yet magical thing which has been denied us – a beer with our mates.

Even as I type, the very thought of it fills me with joy and so many plans for that first pint, that first chat, and dare I say that return to normality.  I can taste the beer, feel the joy and savour the moment as if I am there.

However, as well as looking forward it reminds me of the friendships which beer has brought us at Team Moon Gazer and a key part of our ethos – in collaborating with other brewers locally, nationally and internationally, and also working with other local food producers.

These foodie collaborations can work by simply sharing ideas and ingredients, for example when Sarah and the team at Brays Cottage Pork Pies wanted a rich, dark, smoky ale in one of their pies we concluded our Triskele Porter would fit the bill.

Beyond that collaborations can require more out-of-the-box thinking, such as when we teamed up with Simon at Dann’s Ice Cream to produce a malted ice cream using Norfolk Maris Otter barley. It wasn’t just about supplying ingredients we worked on a whole new way of making the ice cream to replicate lots of the brewing process within the ice cream’s production. Now I may be biased, but the result was malty magic!

Either way it works, not just if the products are right but because the chemistry of the people gels as well – we have shared goals and we love working with others to broaden our experiences and usually to have fun on the way!

Collaborating in crafting new recipes with other brewers is also great way to pull you out of your comfort zone. Its not just about creating wacky beers, that’s not what we aim to do we just want good solid beers that use the breadth of experience of the brewers.

However, what has amazed me over the years is the power of beer in encouraging collaborations and friendship.

As part of the Norwich City of Ale beer festival a few years back we wanted to create a beer to promote the historic links between Norwich and Rouen – a relationship which dates back centuries.

A random, unannounced email to Northmaen brewery just outside Rouen resulted very shortly afterwards with an overcrowded 4 x 4 of very tired Frenchmen arriving at our brewery, dressed as Vikings, armed with French malt, gifts and some of the biggest smiles we have ever had the pleasure of seeing.

The fact that we couldn’t really speak each other’s language didn’t seem to matter – we all spoke the language of beer – a shared passion.   And so was born a beer called Amitié – French for Friendship.  Using Norfolk and French ingredients this nice hoppy, amber ale was a joyous fusion of a traditional English bitter and a softer, sweeter French ale. It worked!

The guys popped back a couple of weeks later to the City of Ale festival so they could savour our joint creation. Soon they were making more and more friends in Norwich and learned more about the history of the two cities including that the stone which built Norwich Castle 900 years ago was transported by sea from near their brewery to the heart of Norwich.  They were then determined to replicate that journey but instead of bringing stone they brought beer for the following year’s festival.

OK, so on the way there was an 8-hour sea rescue by RNLI, a broken tall ship abandoned in Harwich, a flotilla of river boats, more breakdowns, two Lord Mayors, but they duly arrived on water, by boat and more Amite Ale of Friendship was drunk.

Similarly, when planning a beer to celebrate Norfolk Day we emailed a brewery in Norfolk, USA, called Smartmouth and asked – fancy brewing a beer to launch on both sides of the Atlantic on Norfolk Day?  The result was another friendship formed with brewery owner Porter who used the opportunity to bring his family over to fall in love with the UK Norfolk. It also created a great beer called PondHopper – a very quaffable session IPA.

Sadly, Covid has to date prevented team Moon Gazer hopping over to the USA but plans are afoot.

To be fair the commercial reality of all the projects was questionable at best, it went beyond that – as I said earlier it was about the friendship and the fun.  Long lasting bonds have been made and the value of that is priceless.

There are so many other projects across the years I haven’t been able to mention but you get the jist – have a random thought in your head, find a like-minded person to share it with you, then make it happen.

Which brings me back to the beginning – that pint in a pub with a friend when lock down ends.

Well enjoy it, savour it and value it.

Oh, and look out for a fresh brew of Moon Gazer Amité and raise a glass to friendship.