The joys of beer in cooking 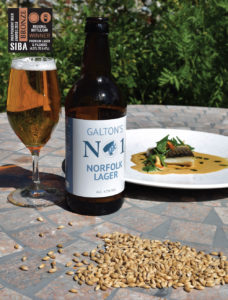 As a small brewer, I like many others could be forgiven for thinking that the world was against us in 2020 – pubs and hospitality in general suffered greatly.

However, all things considered we enjoyed a great summer. It was great to be back brewing Moon Gazer and even creating new brews. But then, as the clocks went back and the nights drew-in we were hit with Lockdown 2. The chance of a comforting November pint in a cosy pub, with logs a-blaze has been taken from us – for this year at least.

That got me thinking about how comforting beer can be – not just in drinking it but in the environment and atmosphere in which we enjoy it. We can also take comfort in beer used in food – after all who isn’t drawn on a pub menu to a beef and ale stew, or beer battered cod.

But beer’s culinary delights are – and can be – so much more than the familiar pub recipes.

There are so many beer styles; wheat beers, lagers, dark strong ales, fruit beers, hoppy pales and more, all delivering variety and versatility in recipes.

In reality, flavour is created by chemical reactions of the ingredients and how different foods sit and work with each other – ideally in a balanced way. You wouldn’t, for example, when making a sauce for a subtly flavoured Turbot or sea bass swap your usual white wine for a dark stout and not expect the fish flavours to be lost – but try it with DewHopper lager and wow.

As with brewing get the balance right and the harmonious results can burst with flavour and move the food you create to another level. You can think of beer as an added ingredient or simply use it as you would seasoning – a dash of Moon Gazer Jumper to add a herbal note to a dish, or some Pintail to add a touch of sweetness to a chicken casserole. A dash of stout along with your Worcestershire sauce can all help.

Rather than give you some recipes I thought it would be useful to offer a few pointers for you to add a different twist to some of your own favourite recipes which you may be cooking up this year.

If you already do your own beer batter for fish – try replacing your normal choice of beer with our Ginger lager – Jackalope. This will give a real life to your batter and add a subtle zestiness which will compliment the white fish perfectly. If you really want to break with tradition try adding some to your Yorkie pudding batter as well – lush!

But what other simple options might there be for your usual comfort food?

Well if like me, you love a baked Camembert then prepare for take-off. Before you bake it pop it out the packaging, into a bowl and fork a few holes deep into it. Add about 150ml of nice dark porter or stout and soak in the fridge for an hour or so – then return to the packaging and cook as you would normally. Moon Gazer Triskele Porter for a hint of smokiness is just great for this!

Spag Bol is another dish where most people will have their own recipe but how about adding in some beer. If, for example you normally add 500ml of water, try replacing it with a softly bittered, but hoppy, golden pale ale – Moon Gazer Pintail will add an intensity of flavour without making it overly ‘beery’, but equally a wheat beer or a New England IPA will also do the trick.

Puddings and sweets don’t have to be off limits either – swap the water used in a Treacle Sponge with a dark mild to get extra silky-smooth complexity of flavour.

Please, don’t be afraid of the beer – if you usually add a dash of wine or cider to your cooking, then pause for a moment and think of beer instead.

BUY OUR BEER TO COOK WITH HERE