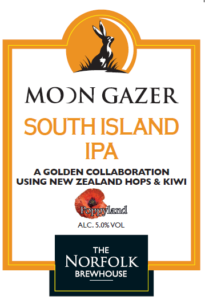 One of the joys of City of Ale for us at Norfolk Brewhouse is our annual collaborations with Martin from Poppyland Brewery.

Over the last few years we have crafted some great one-off beers such a HopBean IPA, Tidal Gold, Norfolk Harvest and Chevalier Gold.

The joining of minds and let’s face it brewing egos has always seen us add twists to the beers, and I often refer to it as Martin pulling me out of my comfort zone.

Well, I’m delighted we will be coming out of that comfort zone again this year but will be doing something slightly different both in the recipe and also how we collaborate – as we will be running a brew off.

The idea is that we both brew the same recipe, with the same ingredients at the same time. Bruce will be busy brewing up the Moon Gazer version at Hindringham, while I will be heading across to Cromer and joining team Poppyland and brewing with Martin. You will then be able to savour both and have a real compare and contrast.

As to the recipe, we are crafting a New Zealand IPA – our version will be called South Island IPA as all of the hops used are coming from that part of the country.

Think of a nice malty background from the Maris Otter then pile in heaps of Motueka and Dr Rudi hops to give lemon, lime and tropical fruit flavours and aromas.

Speaking of fruit, I said at the beginning we like to ‘do different’ for City of Ale, so into the fermenter will be going rather a lot of kiwi fruit to further enhance the fruit character and give the beer a nice clean finish.

So, look out for fun and brewing antics on May 9th when we will be playing ready, steady brew – with the beer then ready to be released in time for May 24th.