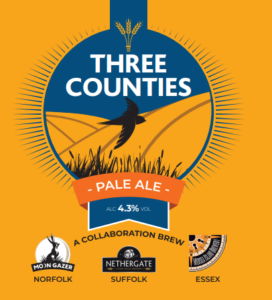 Sometimes you have ideas that pop up into your head, some come off and some don’t.

However, one of the things I like most about brewing is that by and large if you pop a proposition to a fellow brewer they will say yes!

I think that’s largely down to the fact we are an inclusive lot and like to do things that are different to the daily hum drum.

Such was the case when I was chatting to Andrea at East of England Co-Op about their Sourced Locally programme and how it helps not only to showcase small local companies, but beyond that they also bring small producers together to feed off each other.

As part of the conversation, I happened to say, maybe one day we could bring a brewer together from each of the county they have stores in; Norfolk, Suffolk, and Essex?    Then I thought well why wait for ‘one day’ why not now?

So, I got on the phone to Mark at Mersea Island Brewery and Rob at Nethergate – both of who said they were up for it, shared our vison and values of creating a pale ale which could show case the best East Anglian barley and UK hops.

We put our heads together – came up with a recipe which Ian at Nethergate brewed on their pilot  brew kit so we could all taste what our collective inputs had created.

Luckily at the time I happened to be walking past Nethertgate as part of my 149-mile charity beer push to London – so it was a welcome break to pop in and taste it. Ian had done an excellent job, a light golden ale with a crisp, fruity finish.

We all very wanted to keep the balance between traditional and contemporary – not go to old school or too modern – a pale ale that can be enjoyed by all.

So, about the beer.

We wanted the malt to reflect East Anglia’s brewing heritage but also the history of the region. So, the obvious first choice for the malt was Maris Otter – an East Anglian success story renowned by brewers and beer lovers the world over. It also gives beer a great flavour too!

However, we have added some additional complexity to the malt base by using some Pilsner and Vienna malts – to give a nod to the European influences which have shaped this region from conquests over the centuries to more European merchants.

As for the hops we wanted to showcase some of the newer UK hops which are catching the attention, including Admiral, Ernest and Godiva – which gibe notes of apricot, orange and peach – but in a ‘not in your face’ kind of way.

Oh, and returning to the Mediterranean influences we could complete the recipe without acknowledging the Roman’s place in East Anglian history– so we added some orange peel for a bit of zestiness!

So, a big thanks to Rob and Ian at Nethergate, Mark at Mersea Island and of course Andrea at The East Of England Co-Op for sparking the idea – who knows where it may lead.

Three Counties Ale will be brewed here at Moon Gazer – with the pressure on to match Ian’s original – and it will be available in limited edition in cask from 1 August and then in selected East of England Co Ops from the 22nd August as well as from the three breweries directly.