Totally Tropical – our all new IPA 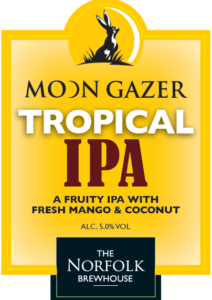 When I first took a look at the recipe for our all new Tropical IPA, I began to wish I had paid a bit more attention to new boy Andrew’s persistent chirps of “Can I use this? Can I use that? Can I use the other?”

Now, in fairness, Andrew, the new boy at Team Moon Gazer was pretty cute in his approach, as he staggered the requests across a few days – so by the time he asked me for one ingredient I had forgotten I had said yes to the last one – it’s an age thing you know.

Fortunately, the final production of the recipe was in safe hands, as Bruce was on hand to steer the wish list into a final recipe and an ace beer. A great combination of youthful enthusiasm and a wise brewer.

Andrew’s passion for craft beer is undoubtable and as the youngest member of the team it was always apparent, he was wanting something a little bit more out there when we said that he could have free range on his first dip into brewing.

The plan was to create an IPA bursting with tropical flavours – but with a sweet bitterness rather than the more common dry bitterness of an IPA.

So, the plan was to make sure lots of the fruit flavours from actual fruits – after all why use a hop with mango characteristics to get a mango flavour when you could just throw in 20kgs of mango?

Add to that a generous helping of pineapple and coconut and the tropical notes were in place before a hop was even chosen.
As for the hops, 3 were selected:
El Dorado – first and foremost cos I think Andrew thought the name was cool, but fortunately for him this American hop also has some great flavours of apricots and peaches.
Olicana – just to prove we Brits do tropical in style to this great British hop delivers some superb grapefruit, mango, passionfruit notes.
Citra – well it had to be Citra when you are looking for that classic American lime and tropical fruit note.

The hops were used in good quantities but also balanced to keep flavour and bitterness in harmony – the beer looks to deliver a taste explosion not just show how many hops we can fit into the kettle!

As for the malt base then – as you would expect – Maris Otter makes up the bulk of the recipe, with Bruce using extra pale for that touch more softness and sweetness, with a healthy dose of Oats and Dextrin added for extra depth and mouthfeel.

So, there you have it – inspired by Andrew’s imagination crafted by Bruce’s skill.

We hope that you enjoy it our all new Moon Gazer Tropical IPA.