Transatlantic ale celebrates Norfolk Day in a can 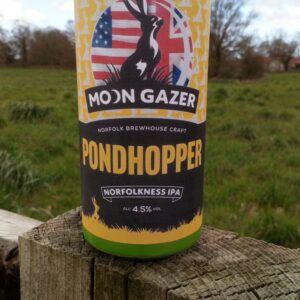 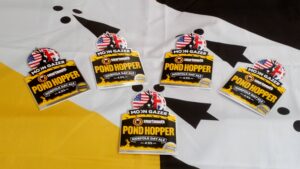 We are once again creating our transatlantic brew to celebrate Norfolk Day and the importance of Norfolkness to us and also our good friends at Smartmouth Brewing – even though they are on opposite sides of the Atlantic.

Pondhopper IPA is a beer collaboration between Moon Gazer Ales, here in Hindringham, Norfolk, and Porter and his team at Smartmouth Brewing of Norfolk Virginia, USA.

It will be the third year the two Norfolk’s join together, having first brewed the ale to celebrate Norfolk Day in 2019, which saw Porter, his wife Kim and family visit us here the UK.

We were due to repay the visit in 2020 but that was cancelled due to the pandemic, as was this year’s visit. However, we are delighted to announce that the beer will be available on both sides of the ‘pond’ this Norfolk Day – in pubs and bars, but also as a new twist in 440ml cans.

We had great feedback on our Norfolk Day beer last year – with the special Moon Gazer ale brewed to celebrate two things about Norfolk of which we are so proud.

So, this year we wanted to use the opportunity to reach out wider across both Norfolk’s and make the beer available in cans through local shops, cafes and delis.

Smartmouth were ahead of us as Porter and his team managed to get their version of the beer in can last year, so we thought that we better catch up this year!

We have each been working on recipes for our own versions of Pondhopper and our Norfolk Day UK version, is a light golden ale using Maris Otter barley and a mix of American and UK hops, while the Norfolk USA version of the same name is slightly stronger – but essentially, they follow the same strands of recipe to connect the two Norfolk’s.
We hope that once the travel restrictions are eased between the USA and UK that Norfolk Day, and the Pondhopper beer can help to establish much closer links between the two Norfolk’s.

We really want this to be the start of stronger connections, by all sorts of people and organisations, between the two Norfolk’s as we share so much history between us. The interest that it has already created shows there is much we can do.

This is a view shared by Porter Hardy, President of Smartmouth:
“When David approached us, it was really out of the blue but we just loved the idea, and the family just loved Norwich and the county on our visit, which included a very special Afternoon Tea at The Assembly House and a VIP
tour of Norwich Castle.

“Beer and brewing do have this tendency to bring people together and this was something we wanted to embrace, and are so glad that we did.”

“Like David we want this to be the start of a great connection between the two Norfolk’s and folks over here just love the story and I’m sure we can hook up lots more producers and associations.”

So, if you want to raise a glass – or can – to farmers and pubs, or to whatever makes you proud to be in Norfolk then look out for Moon Gazer Pond Hopper in cans (which will be available late May), or in your local pub on draught at this years’ Norfolk Day in July.