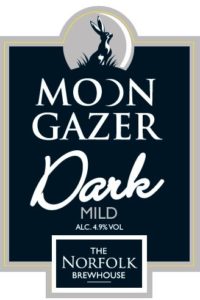 OK, I fess up we haven’t all suddenly developed the Midas touch at Team Moon Gazer but we were thrilled this week to learn of another Gold award for our beers – the fourth of the year.

What made this award even more satisfying is that it is for one of our ‘old school’ recipes – Moon Gazer Dark Mild – so firstly, a massive thanks to Norfolk and Norwich CAMRA for naming it the 2018 winner in their strong mild and porter category.

Now, I’m not sure I should be entirely surprised as although milds have been around since before ‘craft’ simply meant making a cushion or ceramic herb pot it is a style which is finding favour with young and old.

Mild, which originally meant ‘fresh’ in beer as it was not aged now tends to relate to the lightness of hopping in the ale – a far cry from extreme Double IPAs which find so much favour.

But, for a brewer it takes great skill as it allows you to blend a complex array of malts and to let the matly flavours take centre stage.

Unusually for a mild our Moon Gazer Dark is quite strong – weighing in at 4.9% abv.

Naturally, as you would expect from us here at The Norfolk Brewhouse, the base malt is Norfolk Maris Otter, while the dark colour comes from additions of chocolate malt, Crystal 240 and a touch of wheat for mouthfeel and head retention.

The malts are the starring flavours, with a nicely balanced sweetness as well, but there is a low level of hops to provide bitterness and flavour too. We add some British hops; Pilgrim and Progress and just the merest whiff of Cascade.

I’m pleased to say it is established as a firm favourite among our range and hopefully will be for many years to come.