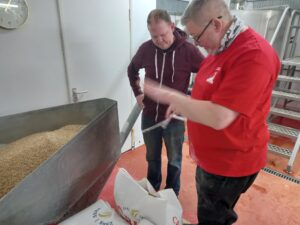 We are very grateful to Nick, Simon and the team at The Trafford Arms for both inspiring us and joining us for our latest new brew – a 2022 version of a Belgique IPA.

The team had bid as part of a Norwich Inns charity auction to develop a new Moon Gazer recipe of their choosing and pop along to brew it. The result is an all new beer which will debut at the Trafford Arms’ Valentine’s Beer festival as well as appearing in pubs across Norfolk and Suffolk.

Now, I am the first to admit that fusing beer styles is not new and was a thing well before the debate about ‘what is craft beer’ ever began. You see, at the risk of showing my age I was known in my youth to partake in pint of ‘twos’.

Anyway, I digress, but the point is that this new brew will be a fusion of Belgian blonde ale and an American IPA.

In terms of creating a new style out of two we wanted to take from a typically Belgian style ale – fruity, spicy, sweet flavours and bring into that the fruity, hoppy flavours of an IPA – but tempered a bit to be robust but not in your face.

Our Belgique gets the Belgian feel initially from the malt recipe, where we used a pilsner malt, blended with Vienna malt and oats as is typical in a lot of Belgian recipes. This will lend a soft, sweet malt flavour. Added to that will be a touch of heritage Chevalier malt – this will add further sweet biscuit tones. Also, the French name sounded pretty appropriate too!

As for the bittering hops, we decided to use a mix of American hops and also some of the newer UK varieties which are making a big name for themselves of late.

Although brewing in Belgium dates back 2000 years the first recorded use of hops in the country’s brewing used French hops from Picardy. These would typically add a soft, fruity bitterness to the beer’s backbone hop flavour. We decided not to go French but to replicate the feel with an exciting new English hop – Godiva – known for its smooth bittering and grape like characteristics. Fitted the bill perfectly.
Then added to this the aroma hops are a blend of big American hops to give strong aroma and a hoppier bite than you would expect from a traditional Belgian IPA. Thought was given to these hops as well to give a Belgian feel and include – Simcoe (grapefruit, passionfruit) El Dorado (mango, peach, pineapple). We also wanted to give a platform to another newish UK hop Harlequin – which is bold enough to join in with its American cousins and brings to the beer more passion fruit and peach notes.

We, as an added authentic twist also added some orange and lemon peel at the end of the boil as is typical in many a Belgian brew and will add some subtle complexity to the flavour and mouthfeel.

The beer will be making its debut as a special dry hopped cask version Ol’Darlin – a nod to the catch phrase of Simon – at The Trafford Arms on 14 February and will be available across Norfolk and Suffolk as Belly White Belgique IPA very soon after.

BTW pubs it is also available for you to order in key keg but be quick!