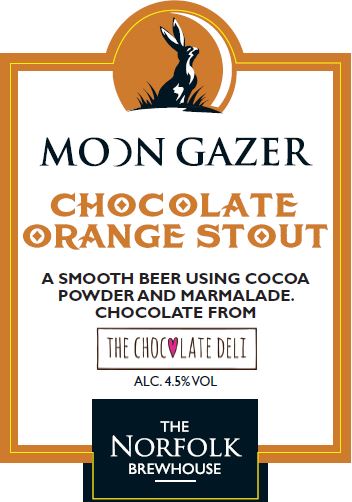 We are delighted to have teamed up with another local North Norfolk business in our latest creation – a 4.5% abv Moon Gazer Chocolate Orange Stout.

As the name suggests we were in need of some rather special chocolate for the recipe. Fortunately, the brewery is very close to a chocolate delight – The Chocolate Deli at Wells, and quite frankly what Dale, its owner, doesn’t know about chocolate isn’t worth knowing. She also does mean line in chocolate muffins, as those of you who attended the wedding of Mr and Mrs Moon Gazer all those years ago will testify!
Anyway, back to the new beer.

When you mention stout most people will think of Guinness, but we wanted to give this much-loved, and traditional style drink, a bit of a crafty twist involving chocolate, orange and marmalade – a chocolate orange in a glass.
To add some complexity of flavour we chose to use 9 malt varieties, with the base malt being Maris Otter of course, but also included roasted barley – the malt which typifies stout, chocolate malt, black malt and a host of others.

We used a single variety hop – the British Admiral hop to provide bitterness and gentle fruit overtones. It has a backbone of orange to its flavour so seemed to lend itself well to the orange theme.

As for the chocolate, Dale suggested a fine natural cacao powder from the Sambirano organic rainforest plantation in Madagascar.

The result is a solid stout, still very much distinguishable by the rich roasted bitterness associated with this style, but smoother off by the chocolate and with a hint of orange on the aroma and palate.

We like it, and it is part of a series of new beers which we will be doing throughout 2017.

I must also give a special mention to Kevin Warden at East of England Co-oP and Sophie de Ronde at Muntons Malt, who invited us to a product development day at Muntons Centre of Excellence, in Stowmarket, where we were able to do a test brew and push the boundaries before doing a full brew. It is a great facility and we are grateful to have been invited along.

Well, we hope that you enjoy the new beer.

It will be in pubs at the end of the month and also feature at our bar at the National Winter Ales Festival in Norwich Feb 21-25.