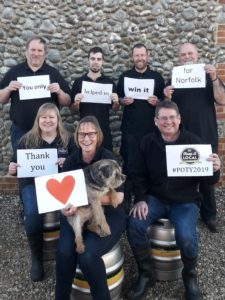 For those that haven’t noticed we have been in a bit of a Battle of the Brewers – but in a friendly way – with Woodforde’s Brewery. We have both battled it out for public votes to be crowned Norfolk Producer of the Year 2019.

This really was a David (and Rachel) v Goliath struggle as we took on a Norfolk brewing institution.

The contest was all part of an initiative by the East of England Co-op who work with approximately 100 local producers across Norfolk, Suffolk and Essex through its multi-award winning Sourced Locally initiative.

Producer of the Year plays a vital role in continuing their Sourced Locally ethos by encouraging shoppers to consciously buy local and quality produce throughout the year.

We are always delighted to have our work rewarded but for this competition, so much of the result rested on the votes from the public. To have this kind of feedback from customers is invaluable.

On top of that, the event gave us the excuse for a good bit of banter between us and Woodforde’s which was fun. We won by just 41 votes – securing 3,233 to Woodforde’s Brewery’s 3,192 – so a massive thanks to all of you who voted, every vote really did count.

So, can we step up to the plate and be crowned the East Anglian champion? To win this title all three of the county winners will now meet a panel of food and farming experts before the overall Producer of the Year 2019 is crowned at the annual East of England Co-op Supplier Supper on March 14.

It’s beer vs bread and jam as the Suffolk winners were The Cake Shop, in Woodbridge whilst in Essex the county crown was won by Tiptree-based Thursday Cottage who make a range of jams and other goodies.

We will keep you posted but rest assured that we will give our best for Norfolk.

By the way, part of the competition involved a short video, so if you didn’t get to see it and would like to see what makes Team Moon Gazer tick – then take a look now: Team Moon Gazer Video