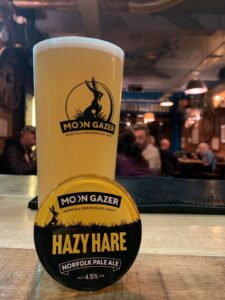 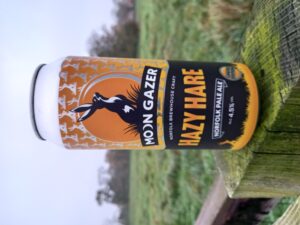 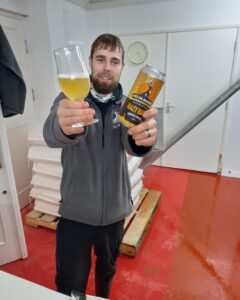 Our latest edition to the Moon gazer range – Hazy Hare – has been getting the tongues wagging a bit, I’m pleased to say.

A super smooth, pale ale with citrus notes and mango, pineapple aroma, it may not be as bold or as brash as some of the offerings out there but what it is, we think, is a very well-balanced drinkable drop. That’s how we like them.

The inclusion of plenty of oats (and some wheat) is what helps to deliver the hazy appearance – but also the smooth mouthfeel. If you wanted to get all scientific the mouthfeel is a result of the starches and gums in the oats.

While you may think its all the rage hazy beers from oats date back well into the 1600s if not before – you can check out how Steve and me recreated once such beer using an old Dutch recipe here – but in fairness it isn’t a style we have done a lot of, so we wanted to bring Hazy Hare into our line-up. Also, at this point we have to say Steve and me had no real part in Hazy Hare as it was the creation of young Andrew at the brewery.

We also wanted to try a few different things as well and so chose to brew with a heritage malt – Plumage Archer – crafted by Crisp Malt just down the road from the brewery. Back in the 1900s this popular malt was the first cross bred variety – combining Archer and Plumage and was favoured for its pale colour, subtle palate and clean flavour.

This flavour combination allows it to give distinctive taste to the beer but also means it is prepared to provide the perfect back drop for the hops to shine.

The hops chosen were a combination of a modern British hop; Harlequin and bold New Zealand and American hops Raku and El Dorado.

The Harlequin is one of the new breed of UK hops hoping to give their US cousins a run for their money, and is already known for its smooth bittering characteristics and its passionfruit, peach, and pineapple notes.

El Dorado is a USA hop offering mango, peach notes and Rakau brings some more passionfruit – so you get the theme here – tropical fruits but not full-on, in-your-face citrus.

We think the result is a well-hopped but balanced pale ale with a smooth, soft bitterness to allow the beer to be savoured.

Our other craft cans:
Skiddadler: 4.5% abv
A dark milk stout with a thick tan head, full-body and smooth mouthfeel. It boasts a warm biscuit and bready flavour and finishes with a touch of bittersweet chocolate.