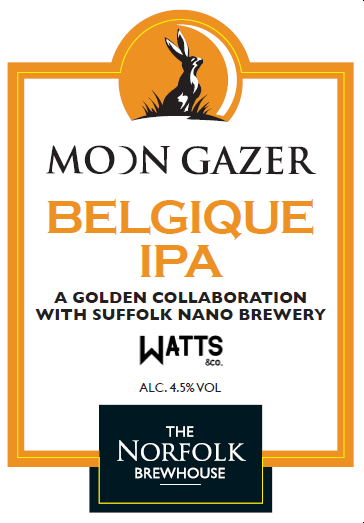 Now, I am the first to admit that fusing beer styles is not new, and was a thing well before the debate about ‘what is craft beer’ ever began. You see, at the risk of showing my age I was known in my youth to partake in pint of ‘twos’.

For those of you of more tender years ‘twos ‘involved – usually out of financial necessity – asking the stout Yeoman of the bar to serve you a pint which was half house bitter and half mild. Result a drinkable blend for under a quid. In fairness, it did taste OK and many drank it out of choice.

Anyway, I digress, but the point is that our latest new beer – to be launched in January – will be a fusion of Belgian blonde ale and an American IPA. We are delighted to be brewing this beer in collaboration with good friend and notable Suffolk nano brewer Oli Watts, of Watts & Co brewery.

Oli’s brewery is based in Debenham, Suffolk, and although small in size is rapidly earning itself a following for some notable beers – and even won best beer of the festival at Colchester Beer Festival. This is one brewer to look out for in the future.

Needless to say that doing a collab with Oli is both fun and rewarding.

In terms of creating a new style out of two we wanted to take from a typically Belgian style ale – fruity, spicy, sweet flavours and bring in to that the big hoppy flavours of an American IPA.

OK, so the easiest way to do this is to take an American IPA recipe and use a Belgian yeast – but where is the fun in that? You know we like to do things a wee bit different at Brewhouse madhouse.

So, our take will get the Belgian feel initially from the malt recipe, where we will use a pilsner malt, blended with Vienna malt as is typical in a lot of Belgian blonde recipes. This will lend a soft, sweet malt flavour. Added to that will be a touch of heritage Chevallier malt – this will add nice sweet biscuit tones. Also, the French name sounded pretty appropriate too!

As for the bittering hops, we decided to use French hops. Although brewing in Belgium dates back 2000 years the first recorded use of hops in the country’s brewing used French hops from Picardy. So, French Mistral hops will add a soft, fruity bitterness to the beer’s backbone hop flavour.

Then added to this the aroma hops are a blend of big American hops to give strong aroma and a hoppier bite than you would expect from a traditional Belgian IPA. Thought has been given to these hops as well to give a Belgian feel and include – Jarrylao (banana, orange, pear) Ekuanot (citrus, tropical).

We, as an added authentic twist will also add some orange and lemon peel at the end of the boil as is typical in many a Belgian brew and will add some subtle complexity to the flavour and mouthfeel.

Finally, the yeast. Oli was very keen on a Belgian yeast but we wanted the twist of blending the two styles more than is usual and so we are using an American yeast, which will still allow spicy fruits to develop in the fermentation but will also bring with it some cleanness in the hop finish and also deliver a clear beer.

The beer will be heading out to pubs the second week in January so will be just perfect to try as part of the Tryanuary season.