What’s in a name? – meet Jumper

The Jumper – the hare in spring, often jumping to box or simply for joy 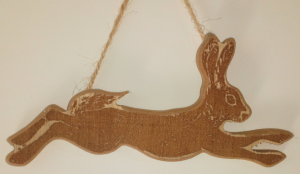 Across the marshes is a sea of purple and green, as sea lavender and sea thrift bask in the early summer sun and proudly put on their colourful displays. Their call to nature does not go unnoticed and the sky is enriched by the sight and sound of butterflies, bees and insects gathering to feast on their treasures of nectar.

Adding to this display are the occasional patches of vibrant yellow courtesy of birds foot trefoil. This is the understated caretaker of wild flowers – oft called the meadow maker – as it works to keep the grasses down, with little or no thanks from its more ebullient flowery neighbours, who’s very existence rely on its work.

But, as trefoil is one of nature’s farmers, this part of North Norfolk has its own human variety creating their more manicured patchwork in the countryside.

Look inland, beyond the marsh, and over the dunes, rustling with their tall drying grasses and a gently sloping hill lies ready to provide its own bounty.

However, for now, this field is but a neatly laid out nursery, freshly sown, and looking like a giant Kit Kat with row after row of perfectly formed seed beds. In a few months’ time these rows will overflowing with rich green carrot tops, but for now they lay still.

This is his stadium, his playground, his favourite place – the place he comes to perform – the hare that they call Jumper.

As he steps out from the Hawthorn hedge – it’s inhabitants of a flock of sparrows shrill with excitement, their chirping growing ever louder and faster – all trying to speak at the same time, all vying for attention, all desperate to be heard.

Jumper remains still, soaking up the sound and its attention – he is fully aware that his audience awaits, and he won’t disappoint.

He takes his first steps, his back arched and starts to walk down the field margin and the hedge seems to bulge and sway alongside him as the sparrows keep up, moving in and out of the hedge, never straying to far from the comfort and shelter it offers.

He quickens, no longer walking, now a jog. The hedge is alive alongside him, his heart races until suddenly he is off. Turning the corner on the field margin, brushing aside the Oxe Eye daisies without a care, zig zagging this way then that until he turns sharply and on to the field.

To him these neat rows are for fun, as at full speed he heads towards them and leaps full stretch – front legs pushed forward, back legs lifted as high as he can. He clears the first row with aplomb and the moment he lands jumps again across the next, before landing and turning sharply. Now he’s sprinting up the furrow between the rows.

He speeds up the hill, the sparrows now content to watch more quietly from a distance.

As reaches the top he turns again as if to give one last display and leaps over one row, then another and another before coming to a stop.

He stands still, the sun behind him. He looks down towards his adoring crowd and across the marshes, then turns and disappears from view.

The show is over – for today at least – this is Jumper – running and jumping for joy.

Read about our other hares:
Jigfoot:
Nibbler