What’s in a name? Meet Bouchart 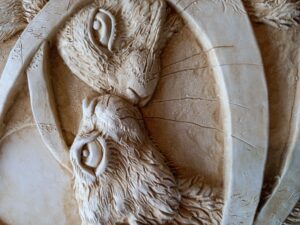 The Bouchart – the noble hare

As the sun rises to cast its warming glow on the land below, the patchwork of fields seem content as if embraced by a protective hug from Norfolk’s big sky.

As the giant sun awakes, it does so slowly, as if reluctant to rush its glorious display – and seemingly hanging on to the sea below casting its reflection from the horizon all the way to shore, before finally rising above into solitude overseeing all below.

The grass and hedgerows soon lose their crisp frost coating as the sun turns the white ice into crystal clear dew drops, reflecting all around them before dropping quietly to the ground.

This late winter scene has a soundtrack of birds chirpily heralding in the day and the imminent arrival of spring – from the light shrills of song birds to the unmissable loud call of the geese making their presence known and enjoying the last of their winter home before flying off to cooler summer climes.

Crushing the frozen grass below are the feet of a hare – not for this hare the rush and excitement of late winter and a time for finding a mate. This is a measured step, a step which signifies someone who has seen it all before and knows time can wait, just for a moment while he breathes in the day.

In front of him is a different sight, with younger hares unable to contain their excitement at the change of seasons and the joys they know lay in front of them.

A bundle of excitement is Jigfoot – dancing his way around a playful Pintail who is well prepared and won’t make life to easy for here young admirer. He weaves around her, turning this way, then that using the full power of his legs to create great speed before standing and approaching her.

She is a match for him as she raises her arms and sends out a fast jab, left, right, left, right becoming a propeller like frenzy. He drops down and circles her again – while nearby the scene is replicated by other members of the drove – a ritual bursting with excitement and energy but none the less a majestic site full of the promise of new life.

Returning to the observing, measured hare – he steps atop a stone as if taking to his throne.
This is Bouchart – the noble one – the elder statesman of the drove of young hares.

His brown fur turning increasingly grey and faded, but his strength and majesty sill very much evident. He may be slowing down but his air of power shows no sign of waning – not just yet.

He looks approvingly at the young ones – while for their part they feel his presence and break very briefly from their courtships as if to acknowledge his approving glances – reminded of Bouchart’s ancestral motto ‘Fais Honneur’ – do honour.

Read about our other hares: Jigfoot , Nibbler, Jumper